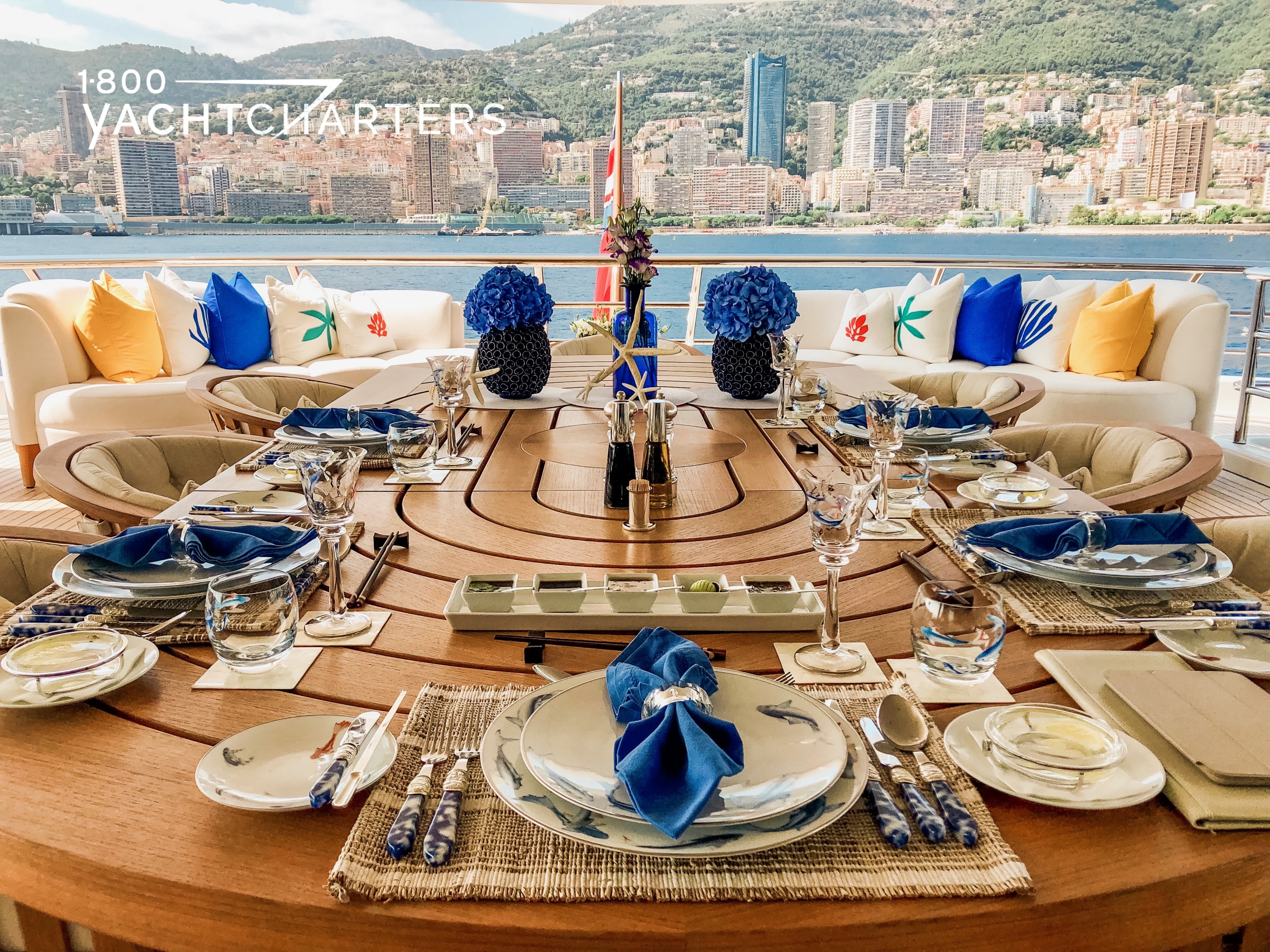 We present educational and fun information. This blog is written by a superyacht Stew (stewardess).  Great tips on dining etiquette on a yacht charter.

<< Stew Cues: The Continental divide at the dining table is drawn on a ‘zigzag’

When I have had the pleasure of having a meal with the crew while training on board a yacht, I often find non-U.S. crew staring at me while I eat. I understand that they are trying to figure out what I am doing. There are various styles of using cutlery. The European, or Continental, style and the American style are quite different.

In the American style, diners switch the fork from the left to the right hand after cutting, and the left hand rests in the lap. While each style is correct for the culture it belongs to, using your knife and fork in a certain way may innocently cause offense to other diners.

THE HISTORY OF DINING

The earliest method of eating was with the hands, of course. Knives came along as one of man’s earliest tools and were used more as weapons for hunting than implements for eating. Spoons probably came next, fashioned from shells, horns, or carved wood, with a stick attached for a longer reach.

In the Middle Ages, cutlery was not provided for dinner guests. Knives and spoons were part of a traveler’s kit that the wealthy used as much to impress as for practical reasons. Most common people still ate with their hands, using dried pieces of bread called “trenchers” to push their food. Some men ate with their personal knives, using two knives to stab and slice their food.

Forks made from twigs were used to remove meat from boiling pots, but the fork as a utensil was not common. God had provided natural utensils – the hands – and it was seen as an insult to use a fork. In 1004, a Greek princess was married to the son of the Doge in Venice. She brought a case of golden forks with her and shocked the guests at the wedding when she used one. Her death from the plague soon after was considered by many to be God’s vengeance.

Catherine de Medici promoted them when she brought forks from Italy for her marriage to the future Henry II. Over time, forks became more common, but they had only two tines and didn’t work very well. Eventually, they became more curved, and third and fourth tines were added for better functionality.

THE USE OF KNIVES

According to a familytreemagazine.com article by David A Fryxell on Dec. 22, 2010, it was a change in the knife that laid forks at every place setting, and forever divided how Europeans and Americans eat. Apparently, the French Cardinal Richelieu had visitors’ knives ground down because the habit of picking the teeth with a knife disgusted him. And in the court of King Louis XIV, pointed knives were banned from the table to prevent dinnertime fights (Game of Thrones, anyone?). Since rounded knives were useless for spearing food, forks replaced them in the left hand.

Fryxell goes on to say that forks were not readily available when these innovative new knives reached the American colonies, so Americans used upside-down spoons to steady food for cutting. Then they would switch the spoon to the right hand, where for most people it would be easier to use it to scoop up food. This style continued to be used even after forks became everyday utensils, prompting Emily Post to name it the “zigzag” style in the 1920s. Voila! At last, there is an explanation for this crazy American behavior that is considered uncouth by many Europeans.

Nowadays forks are on every proper table, and there are many types of specialized forks. We have salad forks, oyster forks, and fish forks. In addition, pastry forks, asparagus forks, and even ice cream forks, to name a few.

In conclusion, the Continental style is thought to be a more graceful way of dining. However, it is best to use whichever style is most comfortable. The golden rule is to be considerate of other diners.  Be consistent.  Do not switch styles back and forth between courses.

Alene Keenan is the former lead instructor of interior courses at Maritime Professional Training in Fort Lauderdale. She shares more than 20 years of experience as a stew in her book, “The Yacht Guru’s Bible: The Service Manual for Every Yacht.” >>

The Superyacht Experience™ includes special educational items.  For instance, proper dining etiquette.  We even share delicious superyacht menus and foods for foodies.  What educational or fun tips about yachting do you want to learn?  Let us know in the comments.  We love the challenge!  Thank you!  And thank you, Alene Keenan, for an informative and very interesting article!  Bon Apetit!

1-800 Yacht Charters. Providing The Superyacht Experience(tm) since 1976. Private luxury yacht charter vacations in the Mediterranean, Caribbean, Bahamas, South Pacific, South Florida, Miami and The Keys, Italian Rivera, Belize. Megayacht charter company focused on generosity, Pay it Forward, Random Acts of Kindness, giftivism, giving back to the ocean, to the needy, and the environment with every superyachting charter. Providing eco-friendly alternatives while on yacht charters and known for 6 star customer service, experience, and generosity. One of the original yacht charter companies...
View all posts by →