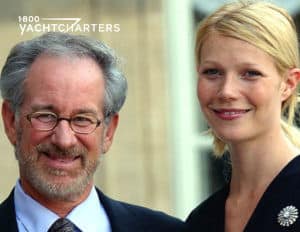 Actress Gwyneth Paltrow joins Steven Spielberg for a day of boating that ends up costing him.  The Hollywood Director received a small fine from the Italian Coast Guard, as his yacht came too close to the coast and angered beachgoing sunbathers in Sardinia.

According to the Daily Mail, Spielberg’s 280 foot motor yacht, SEVEN SEAS, breached maritime regulations.  Beachgoers were quick to call police and the Coast Guard, who slapped the director of “The Adventures of Tintin: The Secret of the Unicorn“  with a 172 Euro fine.

As to the incident, Merchant Marine’s Vincenzo Petrella stated,

“We arrived at the scene, and there was a bearded gentleman signing autographs for people on the beach. Holidaymakers called us because the tender was so close to the shore. I recognized him instantly and he came up to me and said ‘I’m Steven Spielberg. How can I help?’ I told him that regulations forbid tenders coming within 300 meters of the shore. I said that I had no other option but to fine him.”

Per Petrella,  the “very apologetic” director offered to pay there, on the spot.  “I explained it had to be paid via a post office account. He took the paperwork and the next day a fax arrived at our office confirming that the fine had been paid” to the merchant navy.

Originally available as a Mediterranean yacht charter vessel, Spielberg yacht Seven Seas has been used exclusively this season by her famous owner, and numerous celebrity guests, like Blake Lively and Leonardo DiCaprio have been spotted onboard.

Although Seven Seas is not a green yacht, learn more about carbon neutral yachts in our blog post, Ultra Green Yacht to be First Self-Sufficient Zero Carbon Vessel.

Many luxury yacht charter vessels are offering deep discounts to fill their remaining available dates in August.  Take advantage of savings of 25% or more this month.  Contact 1-800 Yacht Charters at https://www.1800yachtcharters.com/book-now-contact-us/ today! 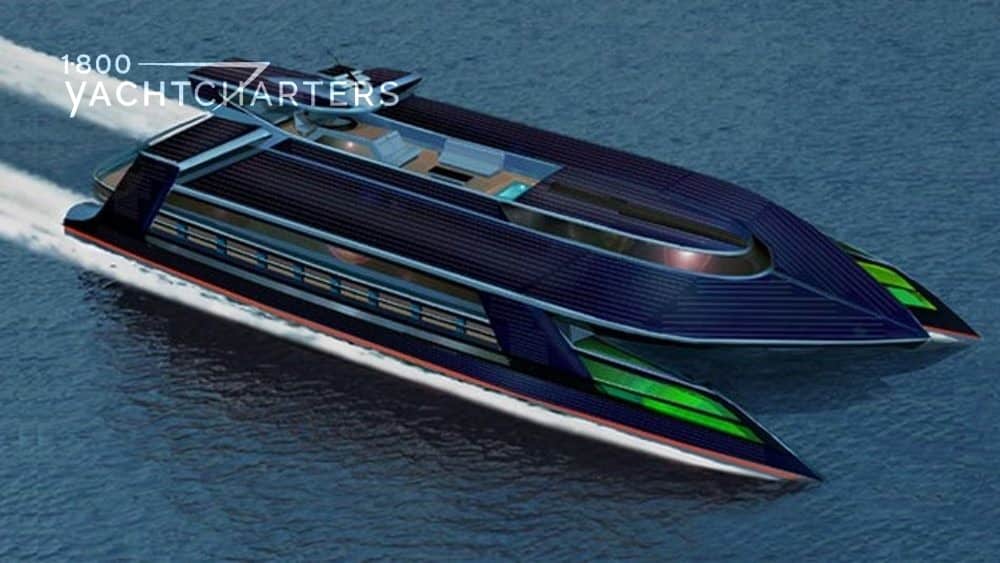 Back in December, we posed the question: Will the yacht charter industry embrace solar-powered luxury yachts, and if so, when?

At the time, the largest solar-powered boat in the world, MS TÛRANOR, had just arrived here in Miami, FL.  The MS TÛRANOR, also known as yacht PLANETSOLAR is a pioneer for sustainable energy technology on water.  She is currently underway on a global circumnavigation.

The vessel is unlike any current luxury mega yacht charter vessel. Catamaran PLANETSOLAR is a 31-meter multlihull covered by an array of photovoltaic solar panels.  Sliding along like a sailboat – the vessel is propelled by pollution-free electrical engines.

Just one month later, there is further evidence that solar powered superyacht technology is moving ahead.

Currently in pre-production, the 144 ft OCEAN EMPIRE will be the first solar hybrid superyacht.  She will feature two hydroponic farms and fishing facilities to harvest the sea.

Mega yacht LSV OCEAN EMPIRE (life support vessel) will boast solar powered propulsion systems.  Aside from that, she will have all of the upscale amenities of a global luxury yacht charter voyager by harnessing 3 major sources of sustainable of energy.

WHAT POWERS THE YACHT?

As a superyacht, LSV OCEAN EMPIRE will liberate the industry from its strict dependence on unsustainable resources by harnessing the renewable collective power ever present in the Earth’s Biosphere.

Ocean Empire is the hopeful forerunner to crewed catamaran charters of the future.  Her build is a state-of-the-art mega catamaran with the ultimate carbon neutrality.  Her solar hybrid design will offer every available luxury within her full range of operation which extends from a 50% reduction in fuel consumption and CO2 emissions, to ultra-green carbon neutral and zero carbon cruising.

As a charter vessel, with staterooms for 10 guests, she will be capable of feeding over 360 megawatts of electricity to the grid.  That equates to enough energy to make up to 12,000 nautical miles of carbon neutral voyages every year. 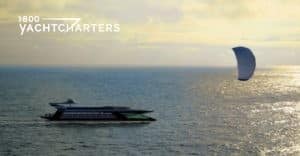 In December we asked if we are witnessing a new era in sustainable energy technology on the seas.  Now, it does seem the answer is a resoundng, “Yes!“