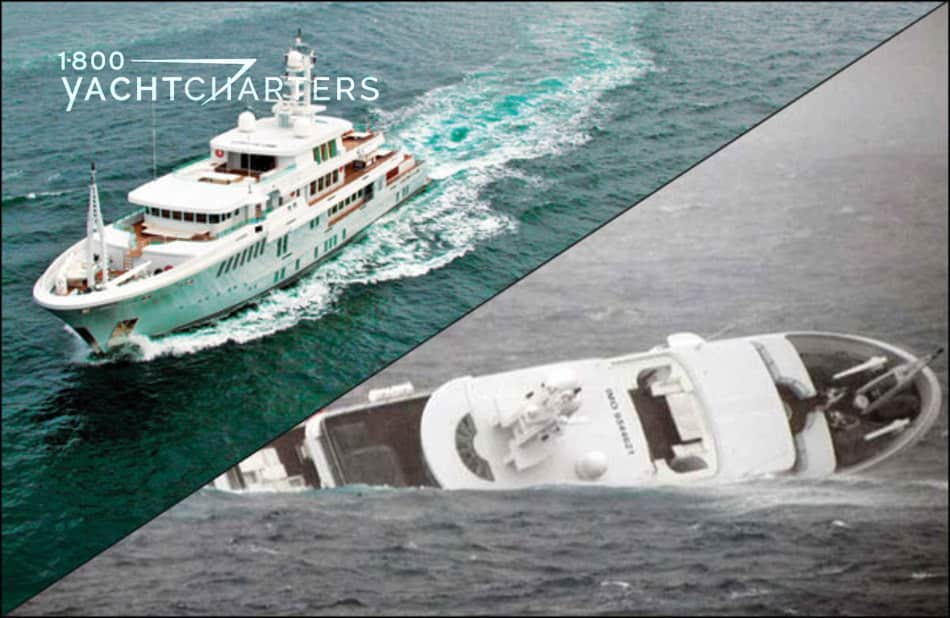 YOGI IN THE NEWS

The Greek Coast Guard reports motor yacht YOGI sank.  She is a 62 meter Mediterranean yacht charter vessel.  When she sank, she was cruising off the coast of Greece.  No one was injured.  All crew rescued.

Built less than a year ago in Turkey by Proteksan Turquoise, motor yacht YOGI was reported to be in trouble Friday morning in the area between the islands of Skyros and Psara, 19 nautical miles off the coast.

WHAT CAUSED THE YACHT TO SINK?

A “mechanical failure”  is blamed for the incident.  It occurred in strong seas and Force 8 winds. There were no reports of injuries as all 8 French crewmembers were rescued by three Greek Coast Guard helicopters, supported by a frigate from the Hellenic Navy.  The crew was transferred to Skyros Health Center as a precautionary measure.

Motoryacht YOGI had just completed warranty work in Turkey, and was en route to her berth in the south of France. Capt. Jean Louis Carrel told Greek authorities that although the weather was rough, he believed the sinking was due to a mechanical failure with the exhaust system.

“What I find surprising is that [from] the first mayday call to the boat sinking was nearly seven hours.  They had power as you can see lights on [in the photos and video shot by the Hellenic rescue team].”

Ask whether any warranty work was done on the engines or exhaust systems,  Karabeyoglu said,

“She was just repainted, but we did no work in the engine room as it was perfect. No mechanical work other than routine service of the Cat engines. Perhaps they took bad fuel when they refueled in Istanbul.”

Proteksan Turquoise yacht YOGI was built in 2011 to ABS +A1, +AMS standards and was classed as Commercial Yachting Service (E). Her stunning profile and interior was designed by Jean Guy Verges, who has designed six other builds by the Turkish-based yard. This was the second of three superyacht vessels delivered by Proteksan in 2011.

OTHER YACHTS BY PROTEKSAN TURQUOISE

Other yachts offered for charter by this builder are motor yacht BARAKA and motoryacht SEQUEL P.

Editor’s note.  In conclusion, 1-800 Yacht Charters’ sources learned today that a purchase offer had been made just days before the incident and had been expected to be presented to the owner… 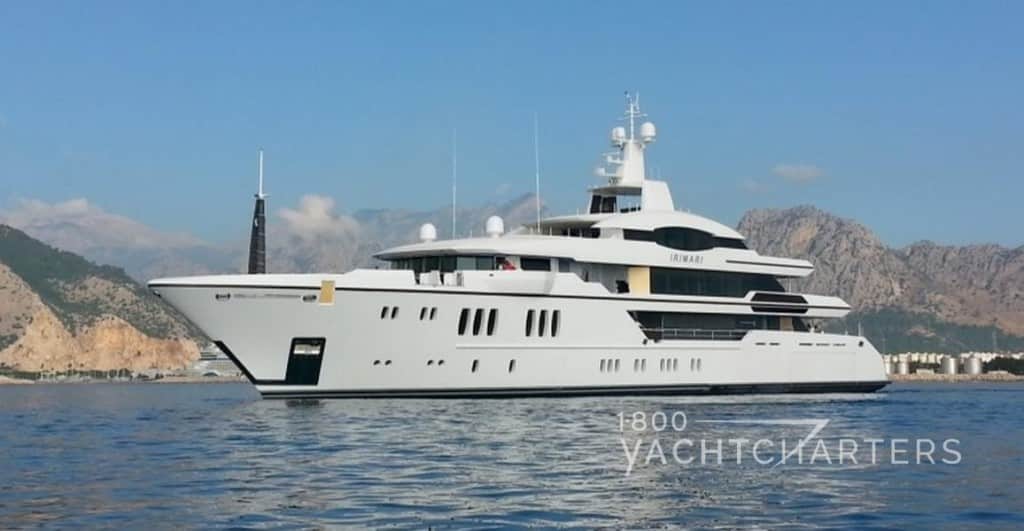 Delivered to her owner in July, the 63 meter yacht is currently cruising in the Greek islands.  So far there is no word if the vessel will be entering the Greek yacht charter fleet.

Per our friends at Boat International, one exciting “superfeature” to be expected inside motoryacht Irimari is “…a video wall spanning two decks!”

Espen Oeino International is considered one of the leading design studios of private yacht charter vessels.  They base in Monaco.  Their specialty is in the category of Superyachts.  Their portfolio includes Lurssen motor yacht MARTHA ANN, and the world’s largest yacht available for charter, Fincantieri yacht SERENE.

The launch of yacht IRIMARI marks the first of the Sunrise 63 series to splash down for the Turkish builder.  The Espen Oeino designed yacht features interiors by Focus Yacht Design and naval architecture by Unique Yacht Design. Built with a high tensile steel hull and aluminum superstructure, the yacht has a transatlantic range of 5,000 miles, and a top speed of 17 knots.

Her owner initially plans spending time onboard. We hope to see this beautiful yacht enter the charter marketplace.

In conclusion, interested in chartering a yacht like this one?  Here is a sampling of some of the newest yachts for hire.

A new, higher VAT (Value Added Tax) rate went into effect.  All charters that commenced after July 20, 2015 in Greek waters are subject to the tax. 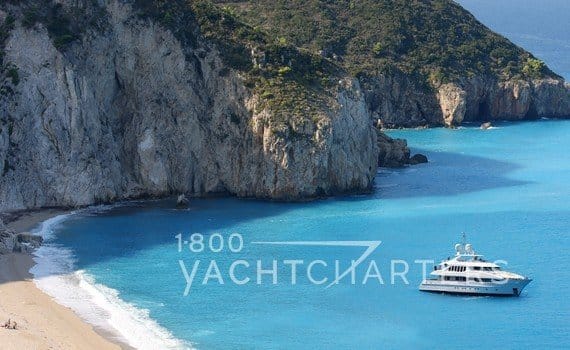 The new legislation raised the overall VAT from 13% to 23%. Specifically, lower rates apply to certain charters, based upon the duration of the hire.

There are two VAT categories for charters lasting 3 days or longer:

Jana Sheeder, President of 1-800 Yacht Charters, points out the new VAT rates affect ALL charters taking place after July 20, 2015 – even if the charter agreements were signed in prior months.  “With the current economic crisis in Greece, we’ve been anticipating  some form of VAT austerity,” says Sheeder. “With each charter agreement we prepare, we add a clause indicating that the charterer is responsible for any increase in VAT – this way, there are no surprises.  The more details we cover with our clients, the smoother their Superyacht Experience will be.“

How will the increase in VAT on private luxury yacht charter vacations in Greece effect the number of yacht charters?

Will clients seek alternate destinations or, “grin and bear it” to enjoy a Greek yachting holiday?

FREE GIFT WITH YOUR ANSWER

Let us know your thoughts.  We will share your comments with our readers AND send you a free complimentary Eco-tote bag!  Email your comments (and your mailing address!) to info@1800yachtcharters.com 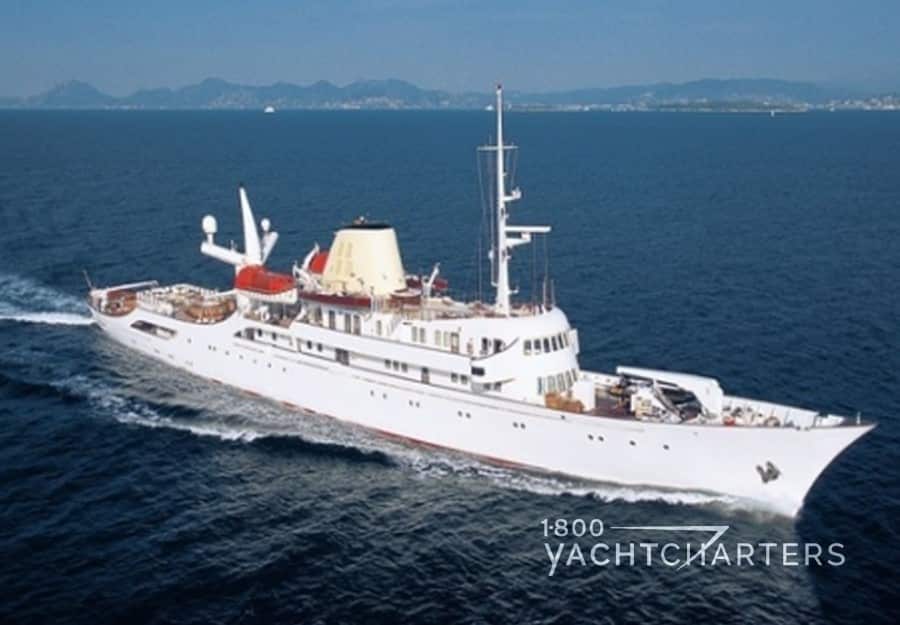 As a destination, Greece is a sensory celebration. It’s a dance with history and ancient gods, and a courtship between natural beauty and modern luxuries. It’s also an invitation to indulge in a slower pace and simpler pleasures, like savoring a taverna meal complemented by a fantastic local wine you’ve most likely never heard of.

Of course, the ideal way to explore the myriad of small Greek islands is to rent a private yacht.

For travelers with experience at the helm, a bareboat charter is the most affordable option for exploration.  Similar to renting a car, you do the “driving” by serving as your own skipper.  Yes, you and your travel companions must also do the cooking and cleaning, but when it comes to saving money, it is hard to top the appeal of a bareboat charter, especially sail boat charters as compared to power boats.

If you are not qualified to operate your own boat, or simply desire a hire level of comfort and amenities, some of the largest yachts in the world can be rented in the land of the gods.

The famous yacht CHRISTINA O calls Greece home.  The private vessel of the late Greek shipping tycoon, Aristotle Onassis, this yacht offers huge deck spaces and the indulgence of an original mosaic-tiled swimming pool. In addition to the Jacuzzi, there are three public lounges, a gym, and a game room – and the famous bar where Sir Winston Churchill first met Jackie Kennedy.

When to go to Greece?  Jana Sheeder, President of 1-800 Yacht Charters recommends visiting Greece between May and  October.

We prefer the so-called “shoulder season” (May and September/October), since the weather is generally good, and you’ll enjoy more elbow room and often better prices in restaurants and gift shops.”

For help in identifying the right yacht for your style and budget, call our specialists, toll-free at 1-800-YACHTCHARTERS (800-922-4824), or click https://www.1800yachtcharters.com/book-now-contact-us/

Our Favorite Three Islands On Earth 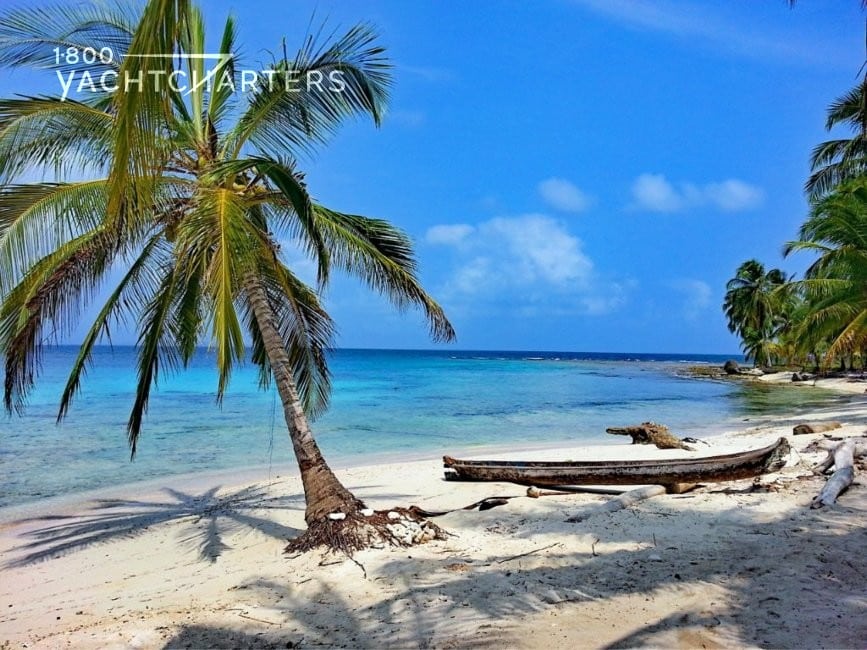 As mega yacht charter vessels get larger and larger, the yachts, themselves, have become the “destination” for charter guests. Onboard amenities from home theaters, spas, and helicopters, to personal submarines, coupled with a “boat-load” of watertoys means guests rarely feel the need to leave the safe, comfy, pampered confines of their floating resort.

According to Jana Sheeder, President of 1-800 Yacht Charters, that is not necessarily a good thing.

“Sometimes we have to remind our clients and ourselves why we first fell in love with yachting,” says Sheeder.  “Initially, you rent a private yacht to escape in comfort and privacy, then  you want to explore a remote area or an island and immerse yourself in its culture.”

Sheeder laments some modern travelers are missing the wonders of exploration by spending too much time onboard their yachts.  “So much beauty awaits ashore, in terms of people, nature, and culture.”

In the spirit of recapturing that sense of wonder and adventure, our intrepid team in our charter department has picked their top three island destinations.  Certainly, there are bigger, more famous islands, but for white sand beaches, salty breezes, freshly caught seafood, and no crowds, head to one of these 3 “World’s Best” secret islands:

WHERE IS YOUR FAVORITE ISLAND GETAWAY?

Finally, where is YOUR favorite island getaway?  Tell us your best island yachting story.  We will post it in our blog and share it with the world!  Send us photos!