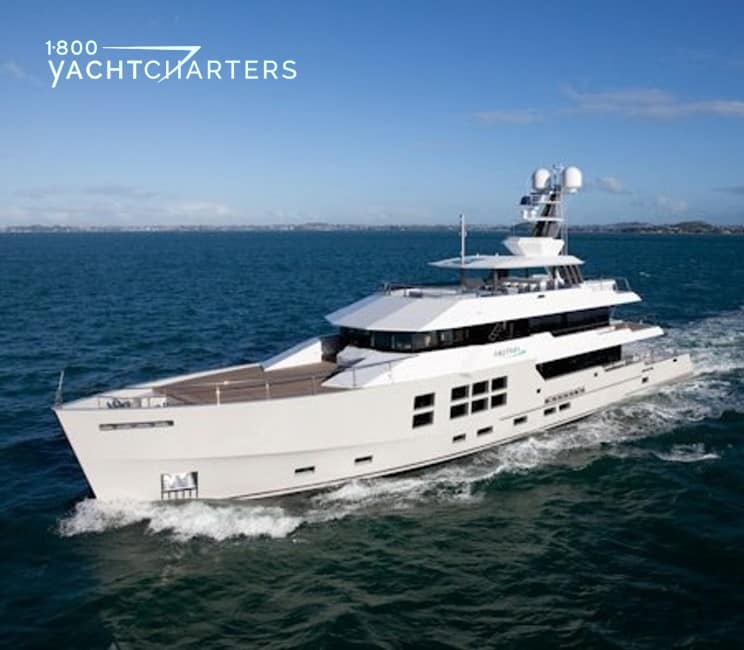 There is an old idiom. “You can’t keep a good man down.”  This applies to a 45 meter superyacht with a penchant for adventure. Just 15 months after her launch, motor yacht BIG FISH is now on her second trans-Atlantic crossing and nearing 50,000 nautical miles on her own bottom. On her maiden voyage she crossed the Pacific Ocean, transited the Panama Canal twice, chartered inAntarctica, and cruised extensively inJapan,  Tahiti, the Galapagos Islands, the Amazon, Sweden, Norway, and theCaribbean.

In the process, mega yacht BIG FISH has booked more than $2,500,000 in luxury yacht charter revenue.

This 45-meter ocean explorer was built in 2010 for an owner who wanted a yacht that could to travel to remote parts of the world, but which also had a contemporary, open style with floor-to-ceiling windows. Designed by Greg Marshall and built at the McMullen & Wing yard in Auckland, New Zealand, this modern-day explorer is loaded with enough aquasports gear to turn the head of any action adventurer.

For “drier” exercise options, she has a full onboard gymnasium.  For example, she offers a spin bike, free weights, rowing machine, yoga mats, and more.

Currently en route to Tahiti, motoryacht BIG FISH is fully booked for March and all of July. Come enjoy a unique Easter holiday in the South Pacific.  Contact the 1-800 Yacht Charters charter desk at https://www.1800yachtcharters.com/book-now-contact-us/

The Pay It Forward and Random Acts of Kindness are critical and a part of everyday life to the team at 1-800 Yacht Charters, led by Jana Sheeder, President.

“It’s wonderful to be a part of a huge Kindness effort,” says Sheeder. 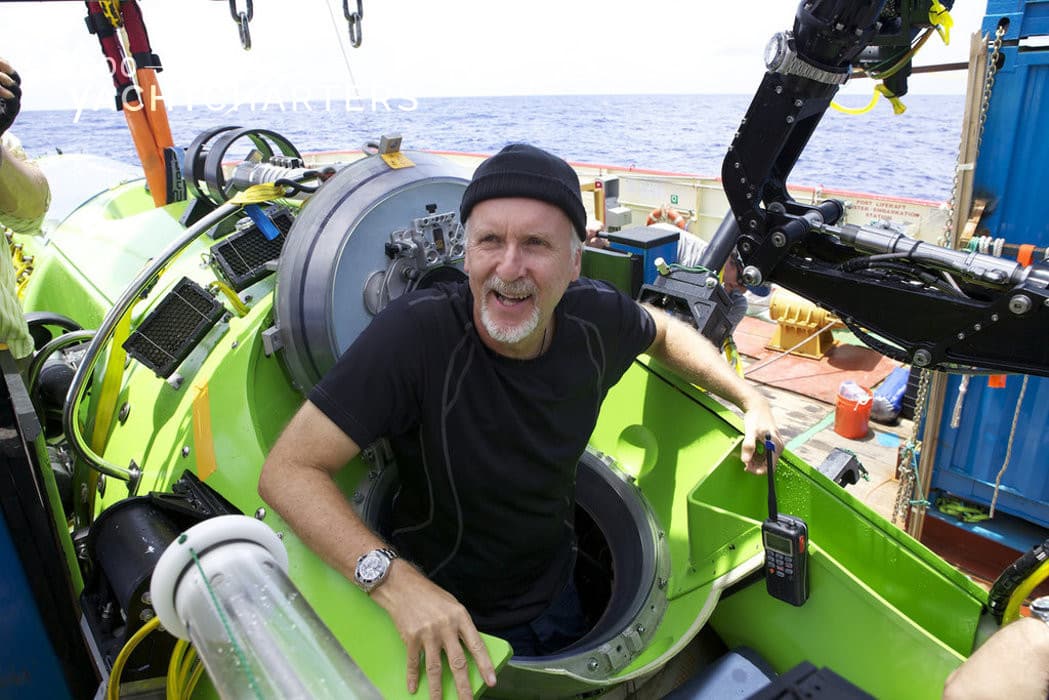 Last January, we profiled the profiled the epic attempt by three teams of modern-day explorers to reach the ocean’s deepest point – the first attempt in over 50 years.  One team was lead by Cameron, another by British entrepreneur Sir Richard Branson, owner of the 32 meter (111 foot) luxury yacht charter vessel NECKER BELLE, and a third team by a Florida sub manufacturer, Patrick Lahey.

In March, 2012, Cameron bested Branson  and the underdog Lahey in a race to be the first explorer of the ocean deadliest trench in half a century.  Cameron plunged about seven miles to the bottom of the Mariana Trench in the western Pacific ocean.  Specifically where temperatures are near freezing and the bone-crushing pressure is one thousand times greater than that at sea level.

HOW HAS THE FILMMAKER NOW HELPED?

Cameron donated the sub.  But that’s not all.  Additionally, Cameron will give nearly $1 million to help WHOI scientists and engineers.  The funds enable them to avail the sub’s technology for deep-sea exploration.

“We’ve been sure to fund this enough that there are enough people and resources available to write this up, publish it, and therefore have it available,” Cameron said during a recent roundtable discussion in New York City with WHOI scientists. “To me, that’s an infinitely better outcome than [the sub] sitting dormant until I’m done with my next two movies, and maybe it comes to the tech community five or six years down the line when it’s already obsolete.”

HOW TO RENT A PRIVATE YACHT AND MAKE A DIFFERENCE

Rent a private yacht and set out on your own ocean adventure.  To charter a luxury yacht for vacation, contact 1-800 Yacht Charters at https://www.1800yachtcharters.com/book-now-contact-us/