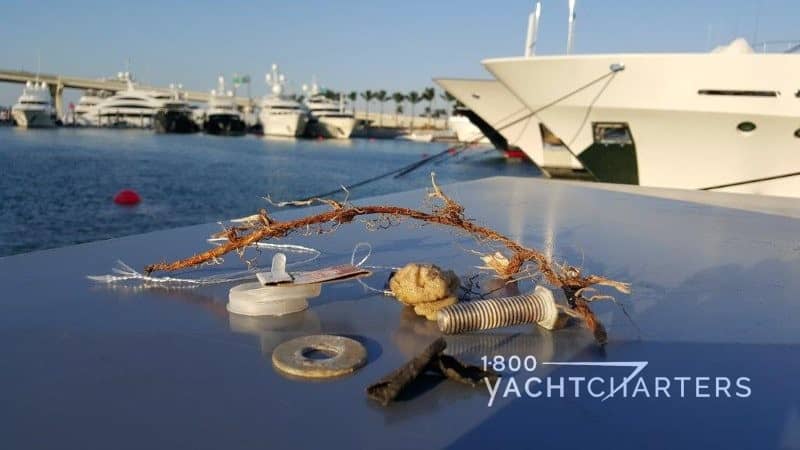 Please be an eco-hero and remove trash from our waterways

This is a photo from the beautiful Yachts Miami Beach Boat Show.  Our inspections included several private luxury yacht charter vessels docked at the Deep Harbour Island Gardens marina, near downtown Miami, Florida.  As we walked along the docks, I noticed our company President, Jana Sheeder, often pausing, bending down, picking up something, and putting it in her “Eco-Hero” tote bag.  I asked Jana what she was picking up, and she paused and poured a few of the contents of her bag onto a locker box on the dock.

“Take a look,” she sighed. “This debris can easily end up in the water where it becomes part of the ocean pollution problem, as well as a threat to birds and marine life.”

So, I snapped the photo you see here.

When I look at this photo, I see beautiful superyachts that serve as a gateway to experience the wonders of our oceans.  I see a segment of the tourism industry – private luxury yacht charter – that generates millions of dollars of revenue annually.  I see a support network of thousands of crewmembers, dockhands, marina workers, and maintenance and repair staff.  They all support their families from a livelihood that is inextricably dependent upon healthy oceans.

For me, the trash in the photo is a harsh reminder that the refuse we see floating in marinas and along the seawalls and walkways is a direct threat to the health of our waterways. It is also, therefore, a threat to our own livelihood.

As you read this blog, I can guess what some of you are thinking.  “I’m not part of the problem – I would never throw trash in the water.”  Good intention, but you or someone you know might still be directly responsible for pollution in our waterways.

It’s a common misconception that most trash comes from people throwing things directly into the water.

“Believe it or not,  much to the trash in our waterways comes from litter thrown out of cars, litter that blows from surrounding areas into the waterways, illegal dumping, and this item really irks me – cigarettes left on the ground,” says Jana.  “During a big rainstorm, all that junk ends up in the watershed, and some of it eventually makes its way down to the bays, harbors, marinas, beaches, and worse – onto our fragile coral reefs and into the stomachs of marine life (like fish and turtles) and shorebirds.”

Efforts are underway to rid our waterways of trash.  In Baltimore, Maryland, two (rather cute) trash wheels are pulling debris from the harbor before it flows into Chesapeake Bay. “Mr. Trash Wheel” (male) and “Professor Trash Wheel” (female with eyelashes) are solar and hydro-powered trash interceptors in place in Baltimore’s Inner Harbor. Over a million pounds of trash has been pulled out of the water by Mr. Trash Wheel since it was installed in May 2014 (Professor Trash Wheel was installed in December 2016). 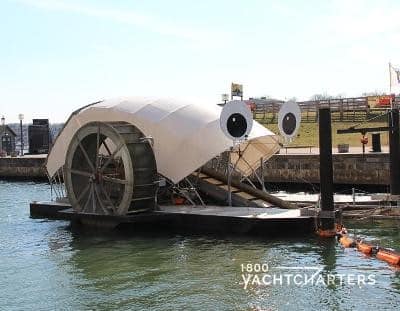 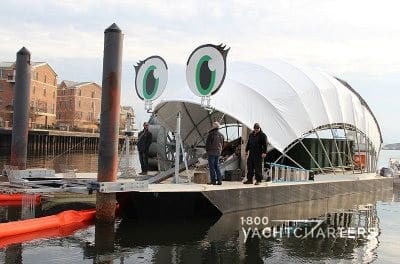 John Kellett (a true ECO-HERO!) invented the trash wheels and tracks the debris collected.  Since May 2014, when Mr Trash Wheel went operational, almost nine million cigarette butts and over 300,000 plastic bags have been collected.   Additionally, Mr. Trash Wheel picks up an average of 14,000 Styrofoam containers a month – second only to cigarettes.

Kellett echoes Jana’s thoughts that the problem starts on shore.  “I thought we were being ambitious with the harbor, but now people are talking about cleaning up the ocean,” Kellett said. “But I think the most effective solution is to get the trash before it gets there.”

WHAT YOU CAN DO

No matter where you live, you CAN make a difference and help protect our natural resources.  Let’s review some simple steps we can all take:

What do I hope will happen?  I look forward to the day that Mr. Trash Wheel and Professor Trash Wheel are forced to take days off because there is no debris for them to clean up! 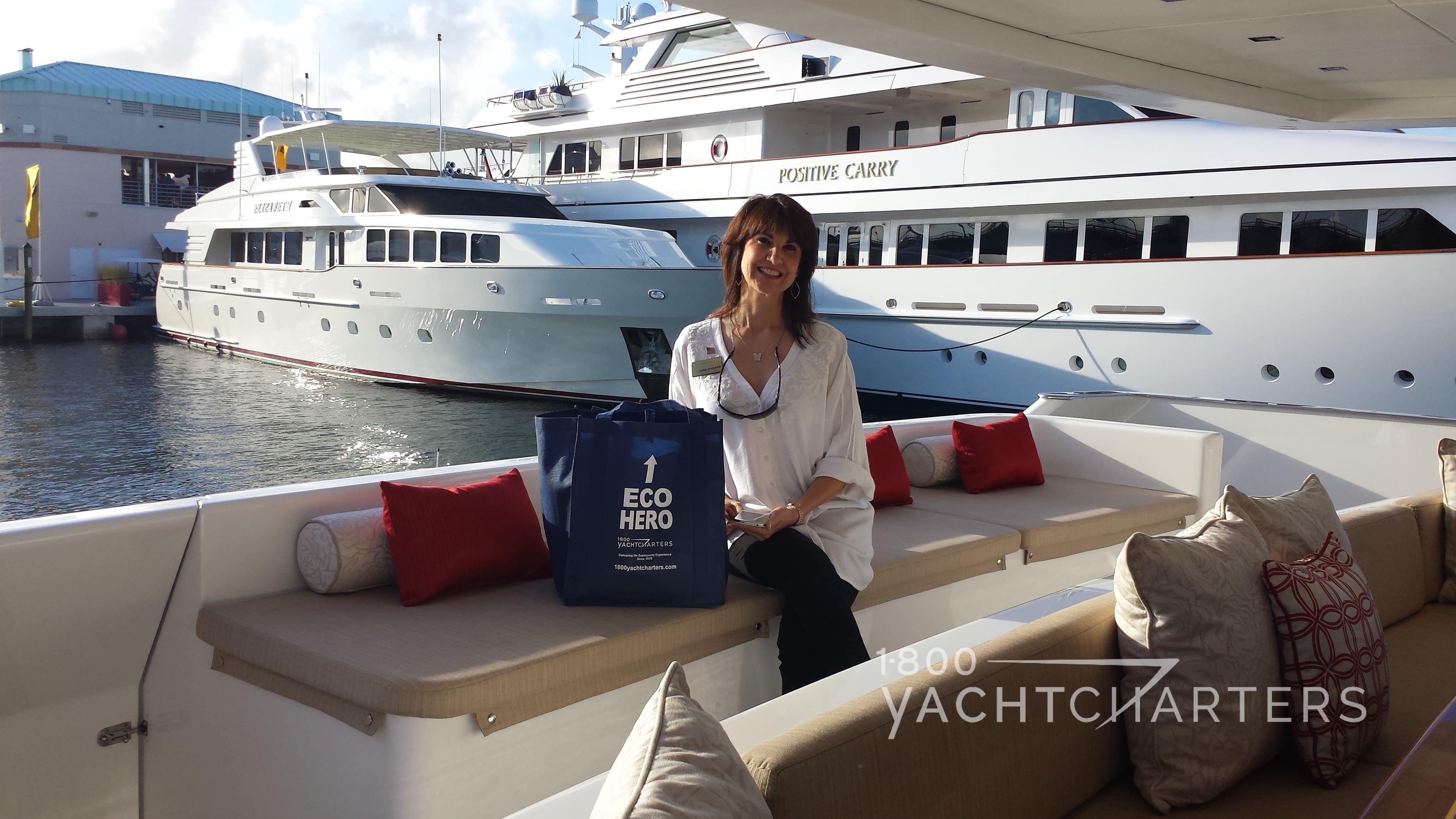 With Crew or Without – Which Private Yacht Charter Option is Right for You?

“My husband and I are thinking about taking the family on a boating vacation. We plan to go to the Florida Keys late Spring/early Summer. I’m assuming it’s more affordable to rent a boat and run it ourselves.  Do you agree?”

What a great idea, Pam!  Since you live in South Florida, a Florida yacht charter vacation in early summer is a great way to explore your “backyard.”  As you know, most tourists have left the area by this time.  Fewer crowds equates to quiet anchorages!

As a general rule, it IS more affordable to “DIY” (Do It Yourself) and drive your own bareboat.   (A bareboat is a boat that you rent without a hired crew).  Affordability, however, is not the only important concern. 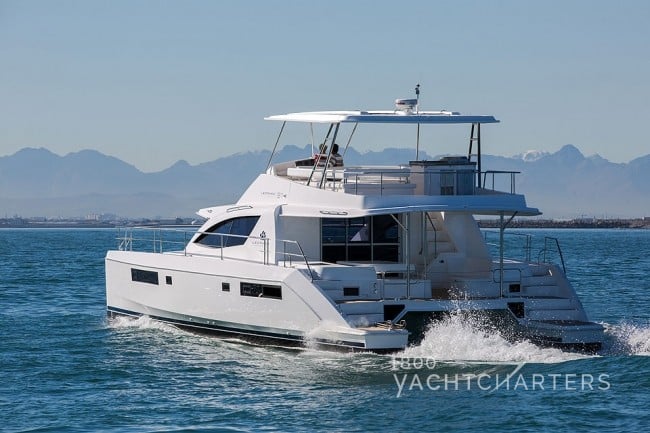 You are qualified to rent a boat without crew.  Next you must decide if you want the responsibility of operating your own yacht.  When you rent a bareboat, you do it all. For instance, safe navigation and reading maps, cooking, and cleaning.  Some people love the hands-on experience.  Of course, this is not for everybody.  Some prefer to sit back, relax, and leave all chores and responsibilities to someone else.  If this better describes you and your family, then a crewed yacht is the way to go.  On a yacht charter with crew, they are fully-responsible for the operation of the yacht. In addition, cleaning/maintaining the yacht and preparing the meals for the guests are their duties.

Like most vacations, your desired budget will often dictate which option is best for you.  IF you are capable and enjoy the responsibility of operating a boat on your own, a bareboat #yachtcharter will give you the best bang for your dollar.  If you want and can afford more than a “bare bones” vacation, try this.  It is one where you are served and #pampered the entire time.  A a private luxury crewed yacht charter is the way to go for you.

A 47 foot bareboat power catamaran in #Miami, suitable for 8 passengers, can be rented in the late spring, early summer for under $10,000 per week.  In addition, you need to factor in the local tax (about 7%) and mandatory damage insurance (estimated at $50 per day).  Of course, don’t forget to consider the cost of food and beverages for your family for the week (or for however long you charter your bareboat).

A similar-sized crewed yacht, such as a 51 foot power catamaran, will cost approximately $21,000 per week, but this rate includes your meals, beverages, and a professional crew of 2.  The only “unknown” expenditure is an optional gratuity for your crew.

Here’s the good news!  Whichever type of chartering is right for you – with or without crew — there is surely a boat out there within your budget and in line with your qualifications, capabilities, and desires.  Let’s go #boating!!!

This entry was posted in Yacht Charter Destinations News Frequently Asked Questions and tagged 1-800 Yacht Charters, Best Price Guarantee, sailboat charter, crewed yacht charter, Miami, bareboat, yachtcharter, pampered, boating, bareboat yacht charter, self-drive, 1-800 Bareboat, responsibility, budget, capability, cruising resume, do i have to know how to sail, can i rent a bareboat without license, is there a bareboat license, what if i don't know how to sail