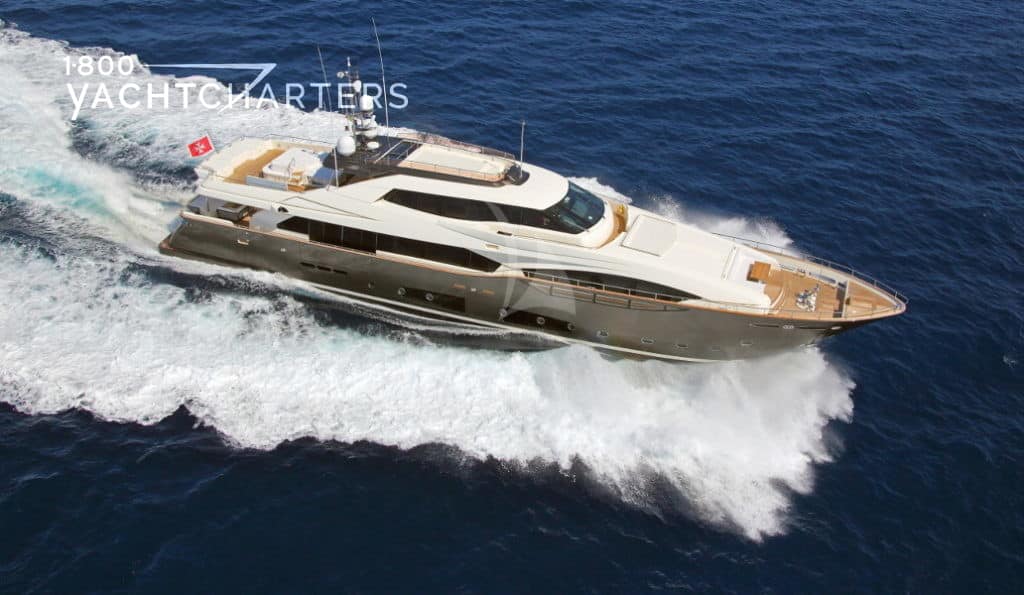 Small to mid-sized luxury sailing charter yachts often offer all-inclusive charter packages. Specifically in the Virgin Islands.  Their larger megayacht counterparts are hesitant to do the same.  Superyachts opt for a la carte pricing.  They simply charge customers for each and every expense incurred. For instance food, alcohol, dockage, etc.

This summer, Captain Bernard Calot and his crew of 5 buck that trend.  They offer all-inclusive mega yacht charter vacations in the Virgin Islands onboard the 121′  motor yacht OLGA!

Rates are valid for up to 8 persons. They include fuel, food, soft drinks, ship’s bar, and selective dockage.  Specialty items such as vintage wines and premium spirits are available.  Subsequently, at extra cost.

This special rate even includes spa treatments.  In addition, manicures. More importantly, from the yacht’s onboard certified massage therapist!  (What a perfect wedding anniversary vacation!)

Launched in 2003, Crescent motor yacht OLGA is an incredibly clean and well-maintained yacht.  She is a Jack Sarin design.  The yacht features a beautiful hard wood interior. In specific, Sapele and Pomele Mahogany.  The woods are complimented by tasteful, upscale furnishings.

The yacht’s full-time chef, Claire, is Cordon Bleu-trained.  Captain Bernard, Mate Clem, and deckhand Rafael can help you burn off the extra calories.  Specifically, through water activities including Scuba diving from the yacht for certified divers.  In addition to SCUBA, this well-equipped yacht is set up for fun on the water.  It carries an extensive inventory of toys. For instance, snorkel gear, kayaks, and a Hobie Wave catamaran.  In addition, waterskis, towable toys, fishing equipment, and a 22’ highspeed tender.

An Angel in the Indian Ocean 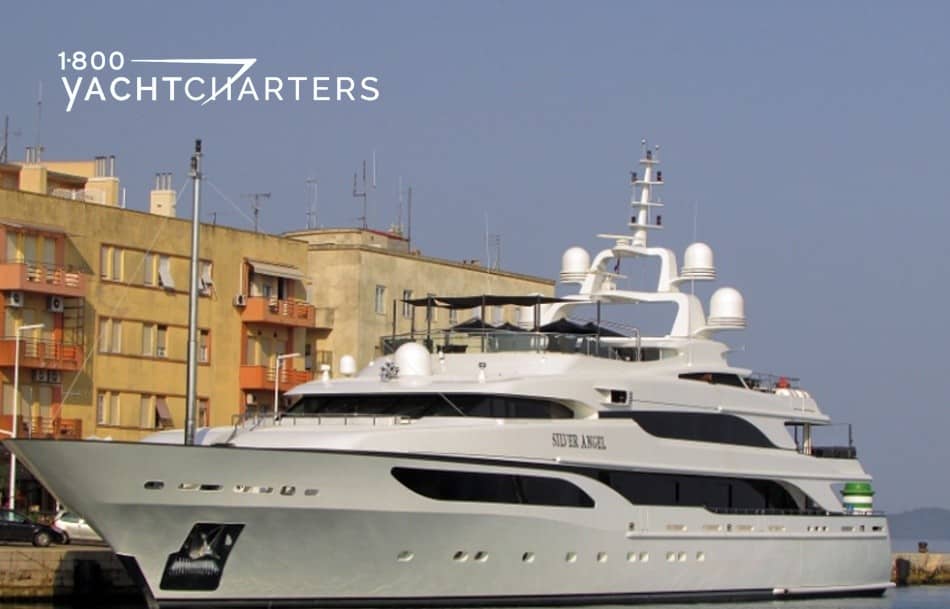 Motor yacht SILVER ANGEL has announced plans to relocate to the Indian Ocean this winter. The 64 meter superyacht will be available for Benetti yacht charter vacations in the Maldives, Sri Lanka, Mauritius, the Seychelles, and Madagascar.

Built by Benetti and launched in 2009, the 211 foot yacht offers accommodations for 12 guests in 7 staterooms. A crew of 21 are onboard to attend to the guests.

The Indian Ocean is an idyllic paradise.  Here you will experience white-sand beaches lapped by aquamarine waters, bright blue skies, and year-round sunshine.

Opportunities for diving and snorkeling abound in this pristine eco-tourism region.

Memories of your time aboard Benetti yacht SILVER ANGEL in the Indian Ocean will stay with you long after your tan fades! 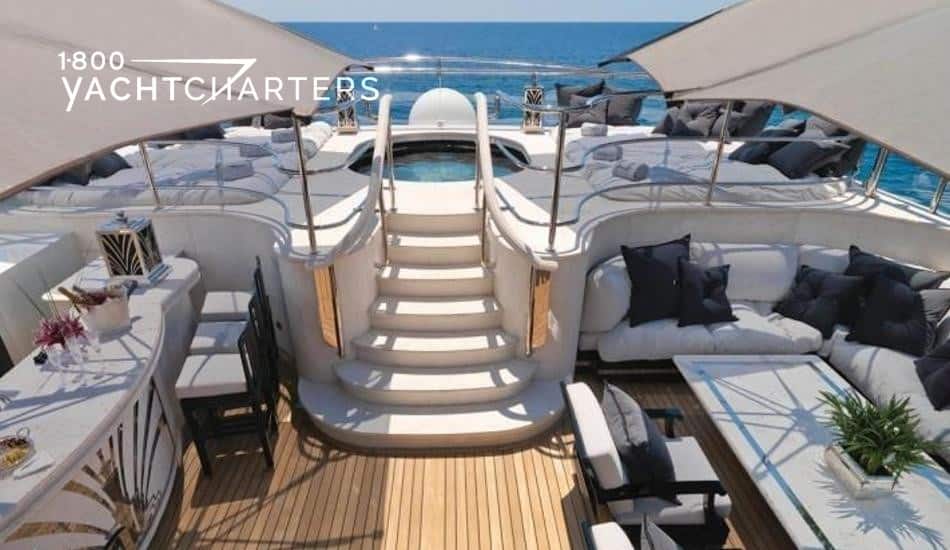 Several other luxury yachts will depart the Mediterranean and re-locate  to the Indian Ocean this winter, including motor yacht MOECCA and sail yacht PERLA DEL MARE.  For more information on this exotic locale, contact our 1-800 Yacht Charters destination experts at   https://www.1800yachtcharters.com/book-now-contact-us/. 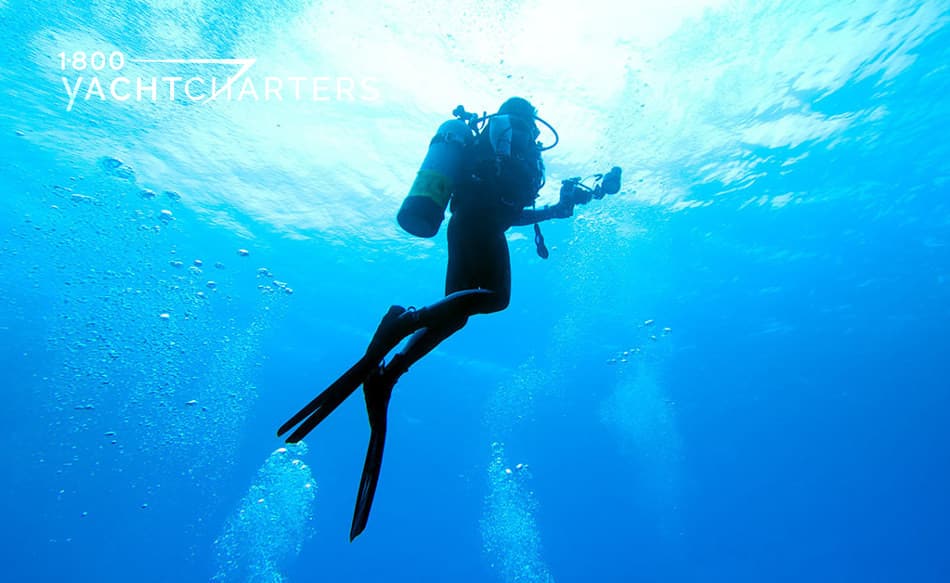 With the tight economy forcing American boaters to reconsider expensive trips abroad, the appeal of Florida yacht charters has increased dramatically in the past two years.  Perhaps not on par with a Virgin Islands yacht charter, there are still plenty of points of interest while cruising along the South Florida coast, especially for charterers who also enjoy scuba diving.

While the Florida Keys may be known for their fishing and scuba diving locations, both Broward and Miami-Dade counties have some of the best spots to scuba dive in the nation. From natural reefs to sunken ships, it’s amazing what can be found off the shores of Miami and Fort Lauderdale.   Many of the reefs and wrecks can be found in 60 to 80 feet of water, making South Florida a great choice for both novice and advanced divers.

Here are some of our top picks: 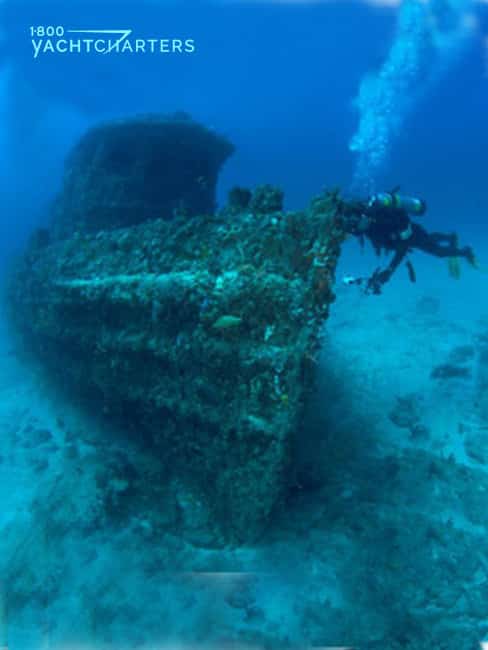 First, Tugboat Jay Scutti (off Ft. Lauderdale)
Sunk in Sept. 1986, this 95 foot tug was seized by the government in a drug smuggling operation. It was bought at auction by a man who renamed it the “Jay Scutti,” after his son. The wreck lies in 70 feet of water and is centered between a 45 foot wreck named “Moonshot” and another named “Pride,” a 95 foot sailboat.  All three wrecks are tethered together by a cable. Divers can usually explore two of the wrecks in one dive. Lots of fish inhabit the Jay Scutti, and it’s possible to enter the wreck through various openings.

Second, Hammerhead Reef (off Ft. Lauderdale)
Located just south of Port Everglades and running to the Dania Pier, this two and a half mile reef is famous for its sharks, rays, and large grouper.  The front portion of the reef is in 60 feet of water, while the back side plunges to 80 feet.  In some spots, the reef rises to nearly 20 feet. Tons of marine life call this reef home and make it a great spot for reef diving.

Third, Miami Beach Wreck Trek (off Miami Beach)
It’s pretty impressive how artificial reefs have been created by linking multiple wrecks together via a guide cable. The Miami Beach Wreck Trek is a shallow dive, about 50 to 60 feet of water.  It begins with a pair of army tanks on the southern end. As they swim north, divers encounter several tons of limestone boulders and more wrecks like the “Rio Miami,” a 105 foot tug which sits upright in about 65 feet of water.

Finally, not far away is the “Belcher Barge #27,” a 195 foot steel barge that was sunk in 1985. The barge flipped on its way to the bottom, but experienced divers can penetrate it and swim the ship’s entire length.

Please comment to let us know about your experiences diving these awesome Florida dive sites!

In addition to cruising in south Florida, Bahama yacht charters are great options for closer-to-home getaways.  Contact our local charter guides for more details in Miami, the Florida Keys and nearby Bimini, Bahamas.

Family Fun: A Bahamas Vacation at 15% off 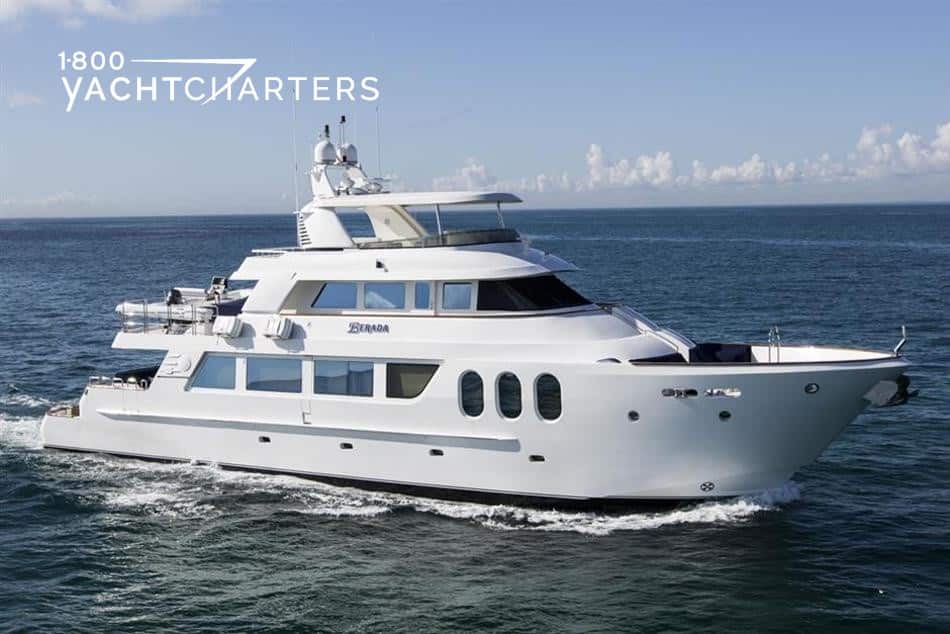 IT’S BETTER IN THE BAHAMAS

They say, It’s Better in the Bahamas, and MCP motor yacht Eagle’s Nest hopes to prove that saying true.

WHY GO TO THE BAHAMAS?

Sure, a Mediterranean yacht charter vacation is fun, but what if you’re looking to stay closer to home this summer?   The Bahamas  are less than 50 miles away from Florida.  In the time it takes to commute to work, you and your family can be in the sun-drenched islands, far from the overcrowded anchorages of the Mediterranean.

Built in 2007, motor yacht Eagle’s Nest can accommodate 6 to 10 guests in 4 cabins, making her ideal for a family vacation.

Each stateroom has many features. For example, a Crestron audio entertainment system with surround sound, reading lights next to the beds, complete blackout blinds, hairdryers, and port holes allowing plenty of natural light.

Of course, motor yacht charters in the Bahamas are all about the sun and the sea, and yacht Eagle’s Nest is the perfect platform to explore the islands.  Her semi-shaded aft deck is ideal for al fresco dining with seating for 8-10 guests, as well as access to the cockpit, forward, and large swim platform, aft.  Moving up a level, the bridge deck is also semi-shaded and features a large Jacuzzi tub with sun pads, plus a barbeque BBQ and ice maker.

For active guests, Eagles Nest carries an assortment of aquasports equipment – from snorkeling gear to fishing poles and scuba gear (for certified divers only).

HOW TO BOOK A BAHAMAS YACHT CHARTER

Take advantage of this great deal HERE …and learn more about other special rates on summer yachting vacations, contact  our destination specialists today!

Q:  “I’ve heard catamaran charters in the BVI are good for divers.  Are there any dive sites there that are not ‘touristy?'”
A:  “Ahoy, E. – The British Virgin Islands (BVI) are famous for their island beauty.  They are considered a top yacht charter destination in the world. However, few charterers are aware that the BVI are a fantastic diving destination, as well.” 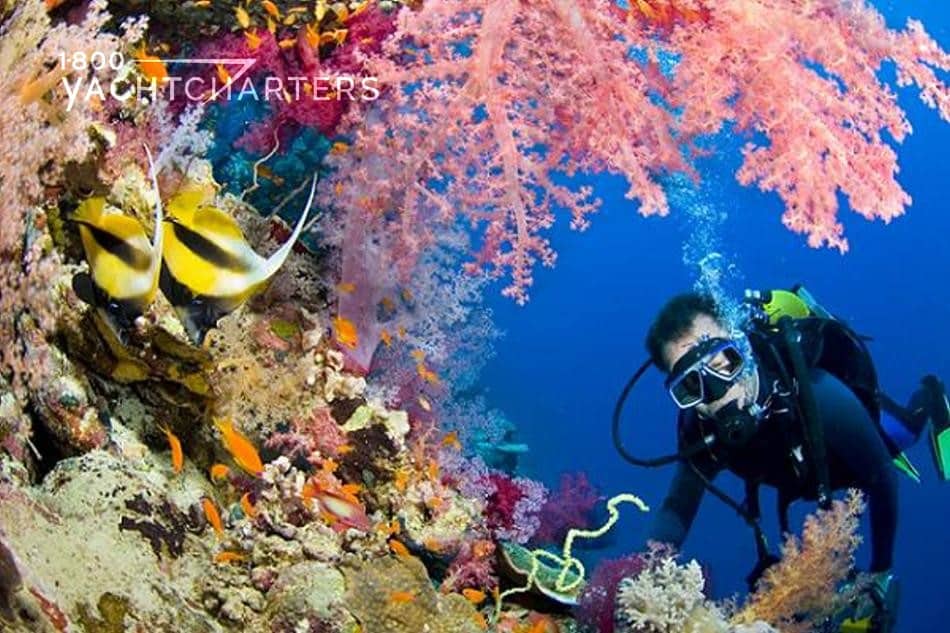 There are numerous wrecks, both old and new, in the BVI, with one of the most famous being the RMS Rhone, a royal mail ship that sank in a hurricane in 1867.  Movie fans are familiar with the Rhone as the location for most of the underwater scenes in the film, “The Deep.”

When it comes to more remote dive sites, dives around the more exposed Cooper Island and Carvel Rock are rarer and more challenging.  These can only be done by experienced divers.  They are also only good if weather conditions are very calm.  When the conditions are right, divers taking the plunge from the east side of Cooper Island at Dry Rocks East will be rewarded!  They will see scores of marine life, including Horse-eye Jacks, African Pompano, Spadefish, Cobia, and Nurse sharks.  If you’re lucky, Hawksbill turtles will also be there.  In the same area the Devil’s Kitchen is a shelf. This shelf  becomes more undercut with a rock structure. The structure forms a unique lattice with numerous hideouts for reef fish, turtles, and lobsters.

HOW TO BOOK A SCUBA DIVE TRIP

With dozens of charter boats based in the BVI, it is simple and affordable to rent your own private yacht.  For more information, contact 1-800 Yacht Charters at https://www.1800yachtcharters.com/book-now-contact-us/ 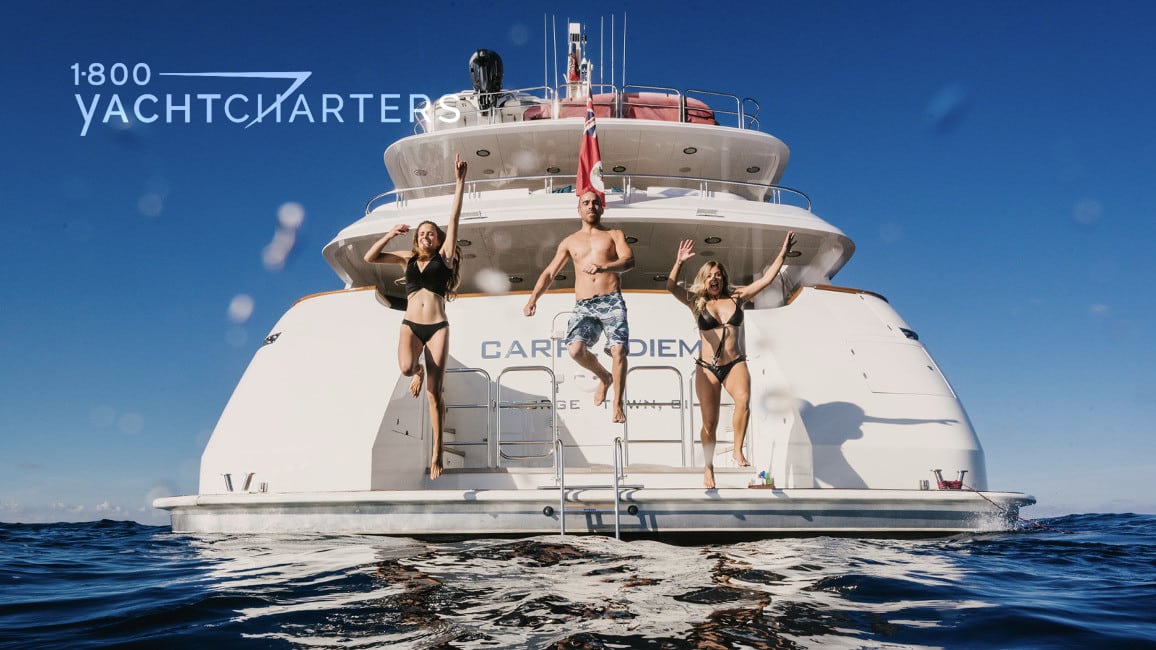 Whoo-hoo!  The yacht’s representative contacted us to announce newly reduced rates. These are for the popular 191-foot motor yacht CARPE DIEM.  The rates are for the remainder of the spring in the Bahamas. Her weekly rate reduction is from $395,000 per week to now $375,000 per week.

Additionally, the yacht is now accepting advanced reservations for the summer in the Med. 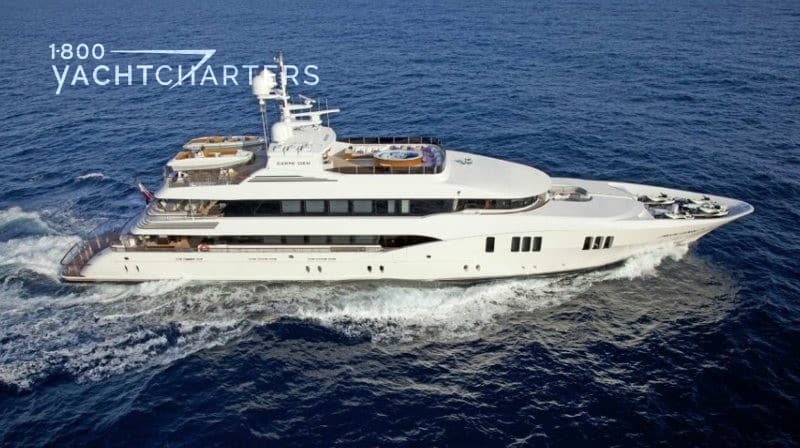 The 191′ (58.23 meter) Trinity yacht CARPE DIEM is well known.  People recognize her in the Bahamas.  Additionally, Captain Ryan Butterwick has a crew of 11.  The past three seasons enjoy affluent travelers onboard.  Most yachts of this size are further south in the Caribbean during the winter. For instance, St. Martin and St Barts.  Captain Butterwick and the yacht’s owner saw an opportunity. In specific, to be one of the very few large private yacht charter vessels. Further, to choose the Bahamas as their home port for the winter and spring.

The representative describes the yacht as,

“…an objet d’art all her own. Her signature interior by Carol Williamson and Associates simultaneously creates a sense of both drama and balance. There is a marvelous display of juxtaposition of design elements. Whereas, joining opposing materials of Madagascar ebony wood with white onyx stone. Furthermore, varying textures of velvet, satin, and embossed Paltrona Frau leather. Showcased throughout the yacht are vintage fashion photographs, art deco antiques, and lavish furnishings.”

In conclusion, active, well-traveled families seek warm-weather getaways on this yacht.  We highly recommend Trinity motor yacht CARPE DIEM.  We have personally inspected the yacht on several occasions and know Captain Butterwick and his team will Deliver The Superyacht Experience™ of a lifetime to you and your guests.  For further details and to check availability, please contact us at https://www.1800yachtcharters.com/explore-our-yachts/carpe-diem/book-now/