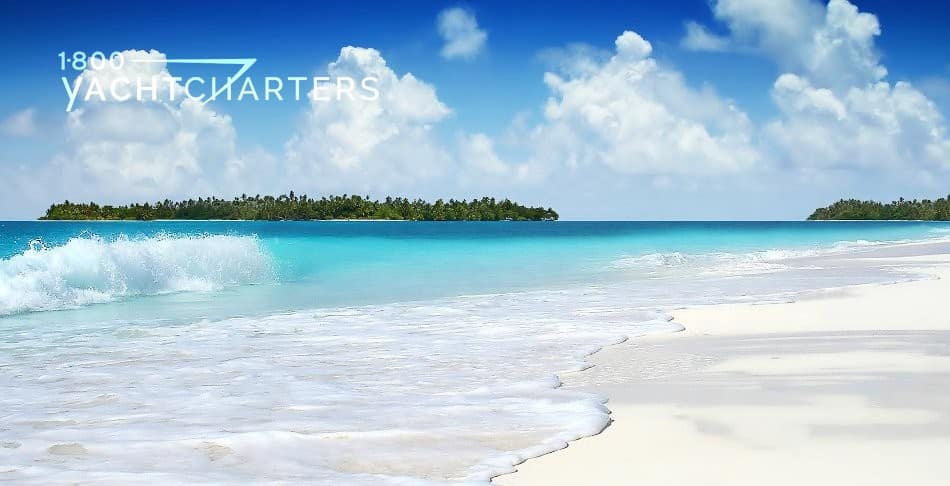 For years,  travel agents and yacht charter brokers have promoted the British Virgin Islands as “Nature’s Little Secret.”  Unfortunately for luxury sailing charter travelers seeking solace and quiet anchorages, the secret is out.  While the BVI and most of the Caribbean remains a fantastic sailing destination, there’s no denying it – it is getting harder and harder to anchor off the shore of a quiet beach.
The good news is that there are still undiscovered beaches in the Caribbean — blissful hideaways where tourism hasn’t yet eclipsed the local culture.
The most experienced Caribbean yacht charter skippers know these secret beaches but are reluctant to disclose their locations.  Fortunately, our loyalties are to our charter clients – and we are more than willing to share these hidden gems with our readers!
Here are our favorite top three secret beaches in the Caribbean:
Lameshur Bay Beach, St. John, USVI
While the bareboat yacht charter crowd is anchored off the Baths in Virgin Gorda, BVI, we like slide across Drake Channel to the US side of the Virgin Islands and go ashore on the secluded southeast coast of St. John, at Lameshur Bay beach.  At the end of the cobblestone beach at Lameshur is a more isolated, sandier strip known as Donkey Bight. Snorkelers love this beach, as it leads to Beehive Cove, a warren of caves and tunnels filled with coral and sea sponges and teaming with fish.
Physical fitness buffs can also enjoy a 1.2 mile hike up a trail to the 1,000-foot peak of Bordeaux Mountain, which overlooks the bay below. 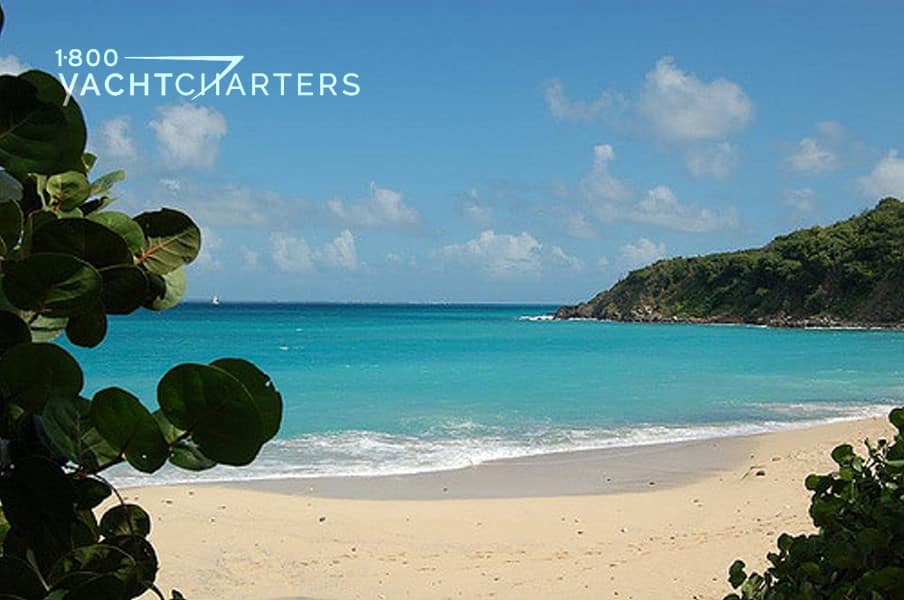 Happy Bay, St. Martin
Located on the French side of St. Martin, Happy Bay is an underpopulated stretch of crème-colored sand. Thick underbrush surrounds the beach and serves as a challenging barrier to most shore-based tourists. The privacy of this beach has made it a popular spot for clothing optional tourists.  Snorkelers marvel at the vast numbers of tropical fish in the crystal waters.
Palm Beach, Barbuda
While nearby Antigua flaunts bustling beachside hotels, Barbuda offers quiet beaches with pink sands, the Frigate Bird Sanctuary, and only a handful of resorts.  Antigua is a great place to begin a superyacht charter (international airport, and excellent megayacht marinas) but do yourself a favor after your board – cruise over to Barbuda and enjoy the solitude…
==============
Summer is the perfect time to sail in the Caribbean – good breezes and few tourists!  To book your Caribbean yacht charter, contact 1-800 Yacht Charters at https://www.1800yachtcharters.com/book-now-contact-us/

Knead A Pizza? There’s a Boat For That

What does a Virgin Island yacht charter crew do, when anchored offshore and the craving kicks in for a slice of pizza?

If you’re Tara and Sasha Bouis,  you buy a derelict boat, gut the interior to install brick ovens, and open the first “Pizza Boat” in the US Virgin islands. 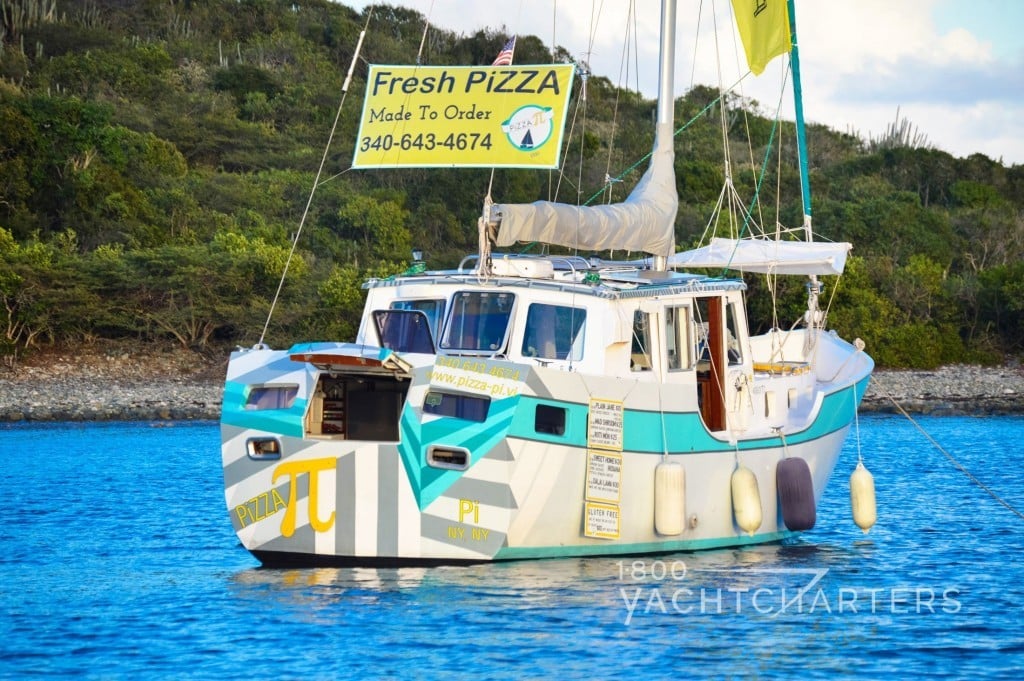 The location is perfect as both personal boats and private yacht charter vessels from St. John and St. Thomas are constantly passing through the cove.  Even tourist-packed daytime sightseeing and snorkeling boats are taking a detour and stopping by the pizza boat, for authentic New York style “pies”  [hence the boat’s name, Pizza “Pi” – get it…the Greek letter “Pi”???).

Before opening Pizza Pi, Sasha was working on charter yachts as the captain and Tara was the chef.

The idea for the pizza boat came from a night at anchor, when Sasha and Tara were too tired to cook, and too tired to dinghy ashore to look for a take-out meal.  They spent the night eating microwave popcorn and dreaming about how great it would be if there were a pizzeria on the water nearby.

After eight years of working on charter vessels together, the couple found a  37 foot abandoned boat on the island of Tortola in the British Virgin Islands.  They spent two years restoring the boat and installing a commercial-grade pizza kitchen with brick ovens and a giant Hobart dough mixer. To run the appliances, Sasha and Tara outfitted the boat with solar panels. They financed the project with the money they saved from working on boat charters.

The couple took a week-long intensive course at a “Pizza school” in New York, to learn to make authentic thin crust pies.

The pizza boat was “launched” about 9 months ago, and business has been steady.  On an average day, they make about 25 pies. On a busy day, 30 to 40 boats stop by for a pizza.  Sasha designed a hatch where people on dinghies can place orders and pick up their pies. 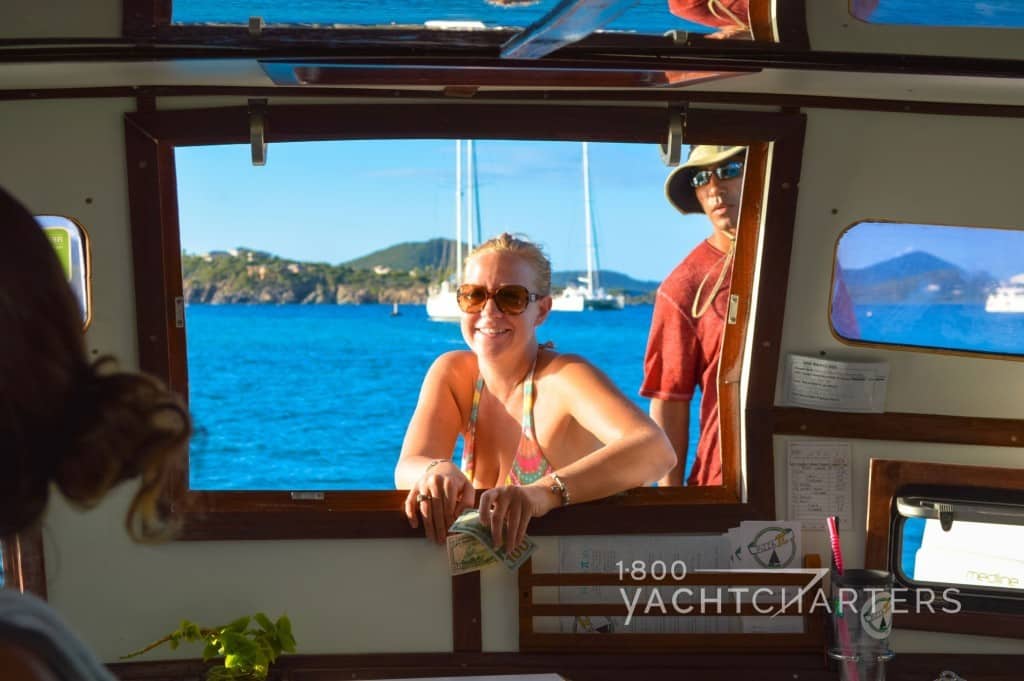 A banner displaying the menu hangs from the side of the boat.

• The Blumin Onion (made with lemon aioli instead of tomato sauce; leeks, radicchio, blue cheese, and honey)

• The Dalai Lama (a pizza with everything on it – the works)

Fresh ingredients like local Caribbean lobster can also be added as a topping.

Currently, Pi is ranked as the best restaurant in St. Thomas on TripAdvisor. It has 59 five-star reviews and one four-star review. The person giving the boat a four-star review admitted the pizza is “delicious” but subtracted one star because they don’t deliver to her house on shore!

FREE PIZZA:  book a yacht charter vacation in the USVI or BVI through 1-800 Yacht Charters, and we’ll treat you to a complimentary large Pizza Pi pizza with toppings during your charter!!!   Contact us at info@1800yachtcharters.com or through our contact form. 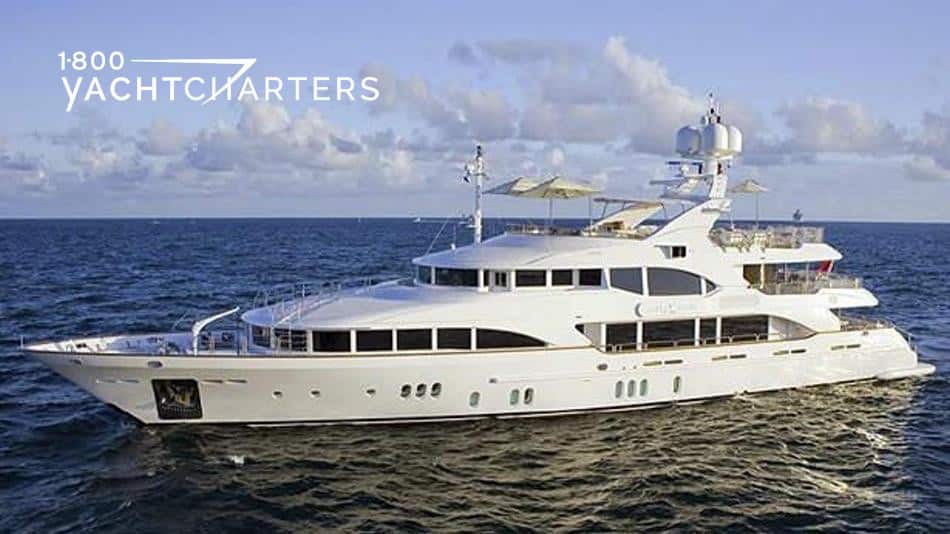 For those who wish to take a Virgin Islands Yacht Charter vacation this year, Lady Sheila may just be the yacht for you.

This yacht is one of the newest luxury motor yachts in the renowned Benetti yacht charter fleet.  She is 44.20 meters (145’) in length and can comfortably accommodate up to 12 yacht charter guests in her five luxurious staterooms.

Lady Sheila’s main saloon has a uniquely chic wooden floor finish with both light and dark wooden strips laid out from port to starboard.  The soft furnishings of her large lounge suites include orange cushions which give life to the elegant white interiors.

HOW TO BOOK A YACHT CHARTER VACATION

In what appears to be a case of “Security versus Tourism,” the British Virgin Islands (BVI’s) have initiated a new policy wherein everyone coming into the territory by sea is now required to present himself/herself IN PERSON to immigration authorities.  This includes guests on both bareboat yacht charter and superyacht charter vessels. 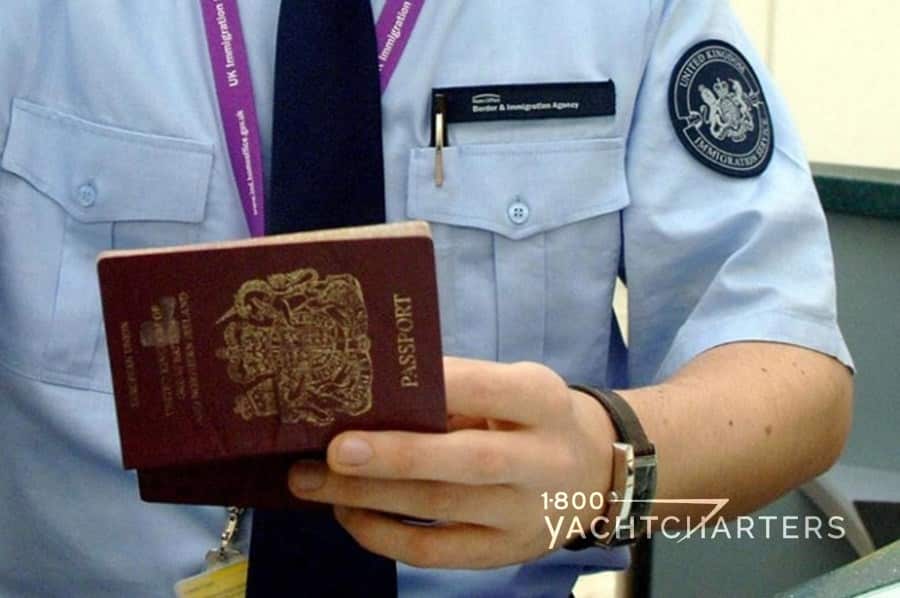 According to a government spokesperson, Her Majesty Customs of the Virgin Islands has, “…taken this step to minimize the potential entry of criminals, firearms and illegal substances into the territory.”

Will the revamped policy affect charter passengers?  Jana Sheeder, President of 1-800 Yacht Charters, explains how the new procedure differs from prior requirements: “In the past, only the captains of yachts were required to disembark and take with him or her all of the passports of the onboard guests. Now everyone is required to present themselves with their passports and their belongings.”

No one disputes the sovereignty of the local authorities to safeguard their islands and residents. Still, for an island economy that depends heavily upon charter yacht tourism, the new policy seems a bit draconian, especially when there is little evidence to suggest tourists, and not local residents of the US and British island chains, are responsible for any uptick in criminal activity.

So, are local authorities barking up the wrong tree?  Sheeder thinks so.  She questions the necessity to impose upon well-heeled travelers who have already been “pre-screened” through the yacht charter reservation process. “The idea that firearms and illegal contraband will be brought ashore by luxury yacht charter guests is misplaced,” says Sheeder.  “Clients sign a charter agreement that clearly outlines firearms, narcotics, and contraband are not permitted onboard.  Furthermore, being in possession of such contraband can lead to the immediate termination of the charter – without refund.”

If any illicit materials are discovered by the crew, the yacht will proceed to the nearest port, where the guests will be escorted off the yacht. With so much at stake, there seems little need to further screen these guests and their crews upon entry into the BVI.

How will the new regulations impact yacht charter tourism in the BVI?   It’s too soon to tell, as the new rules went into effect September 1st.  It is possible charter vessels will simply bypass the British portion of the Virgin Islands and modify their itineraries to focus solely on the US and Spanish Virgin Islands, where captains can still clear the passports for all onboard guests. 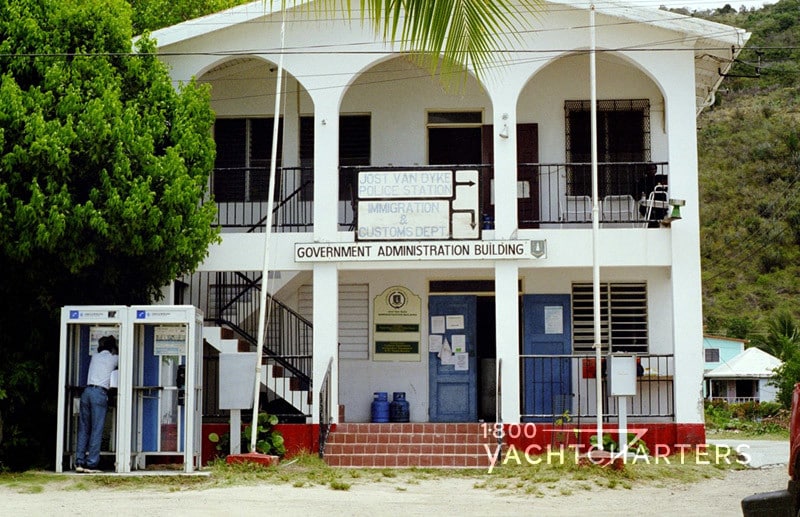 In the the short-run, Sheeder is confident the impact upon charter clients can be minimized.  “We pride ourselves in delivering the superyacht experience. We will offer our clients alternative destinations in the US and Spanish Virgin Islands, and throughout the Caribbean.  For those clients who still wish to explore the BVI, we know we can rely on the captains and crew.  If they need to carry the luggage and escort the guests into the immigration office and back to the yacht, we know that they will do so in the most efficient, professional, and friendly manner.”

Planning a yachting vacation?  Check out the hottest SPECIALS here