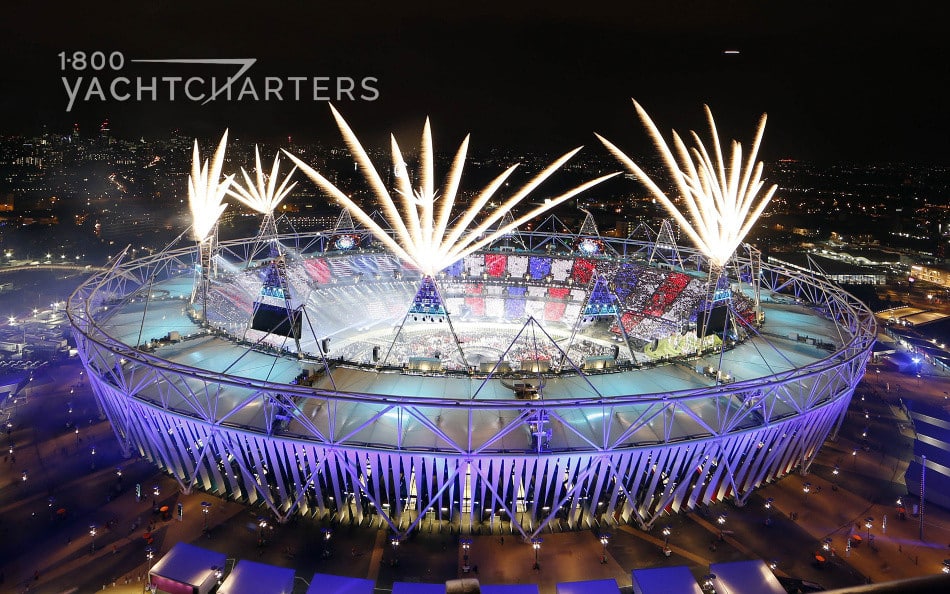 The Olympics.  The pomp.  The circumstance.  A graduation of sorts.  Once again, we are glued to our televisions.  Fifteen thousands (15,000) talented Chinese performers on the field of the “Bird’s Nest.”  China kicked off the Opening Ceremony for the 2008 Olympic games.  Amazing.

Here we are again.  One year before the opening ceremony of the London 2012 Olympic games.

Meanwhile, the notion of renting a yacht for the London games is considered.  In other words, marina reservations are well under way.  Additional berths have been added to accommodate the expected visitors arriving by superyacht.

“We are very excited to see such levels of interest from yachts so far,” says Mark Upton, Director of MGMT. “We were always confident yachts would book for the Olympics but expected this to happen later in the year once the summer charter season ended. We have made a huge effort to keep the industry informed of our concierge services and also the fact that the popular tickets, hospitality, and services will sell out very quickly. It seems our efforts are paying off and the bookings are being made early to ensure visiting yachts receive the full benefit of all the services available.” 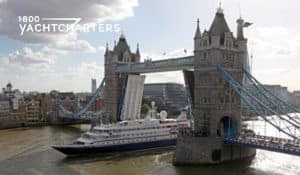 “For the month of August, 2012, London will be the luxury mega yacht charter capital of the world.  Based on the early inquiries we have received, we estimate at least 30 superyachts will be in London and on the Thames for the Olympics next summer.”

HOW TO RENT A BOAT

It is estimated that London’s roughly 120,000 hotel rooms are nowhere near enough.  This problem exists for the 2012 Olympic Games.  A lack of rooms means many visitors will be forced to stay in the English countryside.

Savvy travelers, however, can choose an option that will put them within walking distance of the main stadium.  For instance, they select a private yacht.

The Marina at the London Docklands plays host to dozens of the newest and largest motoryachts in the world during the Olympics.  The facility is two miles from Olympic Park and other venues for the games.

The Docklands accommodates boats from small bareboats to British navy ships and international cruise ships. Megayachts visit the marina, thus, dockmaster and his team are prepared to handle large vessels.

Gareth Stephens is the dock manager for British Waterways.  The agency oversees England’s waterways.  He reports multiple berths are ready for the weeks immediately preceding the summer 2012 Olympics. According to Stephens,

The number of available slips will ultimately depend on the sizes of vessels that make reservations for the games. Says Stephens,

“We are looking to accommodate a mix of cruise vessels and superyachts.”

Minimum dockage reservation period is 21 days.  London Olympics run from July 27 to August 12.  The required minimum booking period is July 24 to August 14. Stays starting before and/or ending after the minimum period are available.

London Docklands offers full marina services and facilities. For instance, water, sewage, fuel bunkering, and garbage disposal. It also has riverboat and “Tube” connections.  The marina is then highly convenient for Olympic events and all major London attractions.To inquire about berth availabilities, contact 1-800 Yacht Chartersx at 720-7245 or click https://www.1800yachtcharters.com/book-now-contact-us/

Prior to the London Olympics in 2012, another special event exists.  A once-in-a-lifetime yachting spectacle in London wants you to participate. Truly a bucket list adventure

The Queen of England leads a flotilla of boats and yachts.  They present the Thames Diamond Jubilee Royal River Pageant on Sunday June 3rd 2012 to celebrate her 60 years on the throne.

For example, over 1,000 boats and yachts of all sizes are expected to participate.

It is touted as one of the largest flotillas assembled on the Thames.  Approximately 30,000 people waving flags and cheering Her Majesty the Queen attend.  In addition, rowed boats, working boats, and pleasure vessels join luxury mega yacht charter vessels on the river.

WHAT CAN I EXPECT TO SEE AT THE JUBILEE?

Taking place just 6 week prior to the opening ceremonies of the 2012 London Olympics, the yachting spectacle will be enhanced with music barges, boats spouting water cannons, and pyrotechnic barges launching daytime fireworks. There will also be specially-constructed elements like a floating belfry – its chiming bells answered by those from riverbank churches.

Thames piers, riverside roads and bridges will be closed to traffic.  At the same time, 40 to 50 giant screens will be erected along the flotilla route.  The public can also enjoy the pageant from multiple vantage points to the left and to the right of the river. The flotilla concludes at Battersea Park.  The conclusion includes music and artist-led Jubilee-themed entertainment.

The Thames Diamond Jubilee Pageant celebrates Her Majesty’s sixty years of service to the British Commonwealth by bringing the Thames to life.  Pageants on the Thames date back to 1453. The River to include superyacht vessels and boats, clanging bells, and tooting horns will recall its royal heritage and its heyday as a working, bustling river.

Participate in the Thames Diamond Jubilee Royal River Pageant this year.  In addition, secure a yacht and berth for the London Olympic games!  Your choice…  Contact our destination specialists HERE right now to reserve a yacht.