A Year in the Life of a Superyacht

Excluding the small sail boat charters that dominate the Caribbean market, in the world of megayacht and superyacht vessels, there are about 830 yachts 80 feet and larger available for a luxury yacht charter worldwide.  What might be surprising to many is this fact: some 600 of these vessels do no more than 3 or 4 weeks of chartering each year. 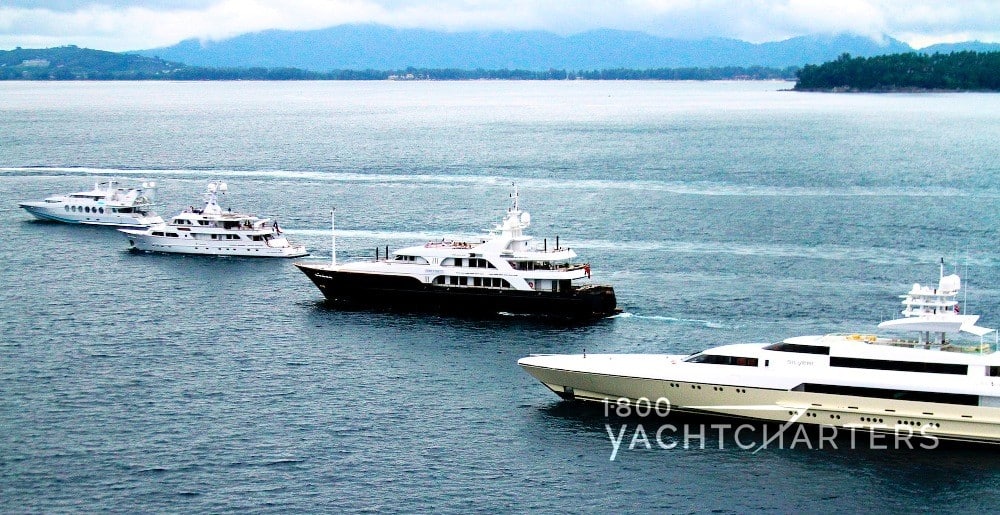 Thus, the upcoming Mediterranean yacht charter summer season has a lot riding on it for boat owners and captains who have — perhaps ill-fatedly from the start — factored 12 weeks of megayacht charter business into their calculations.

So what does a 52 week year in the life of a superyacht look like?  A recent industry survey breaks it down like this:
*Owner’s personal use – 6 weeks.
*Yard time (for repair and maintenance) and crossing time to reposition (Caribbean to the Mediterranean, etc.) – 26 weeks.
*Undesirable charter dates – 14 weeks
*Actual Possible Charter Time:  14 weeks.

With these facts in mind, charter fleet managers now believe a realistic goal for a luxury mega yacht charter vessel is no more than 8 weeks per year… 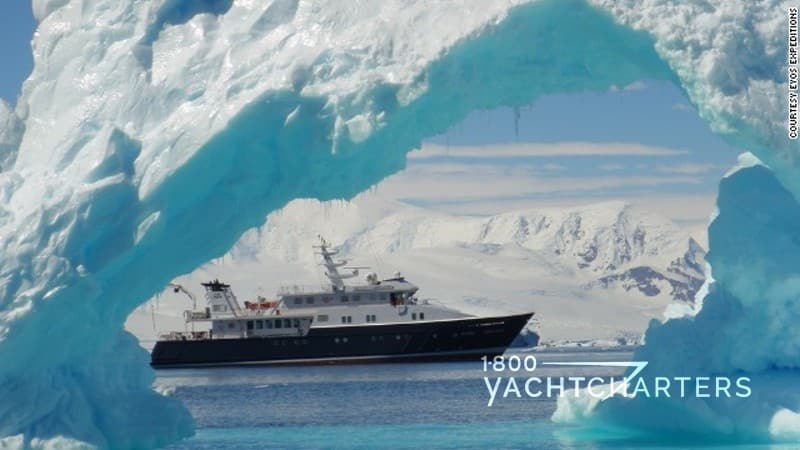 Due to a last-minute cancellation, 1-800 Yacht Charters is pleased to announce a special opportunity to discover Antarctica this January on the world’s largest ice-breaking yacht, the 77 meter (254 ft) motor yacht LEGEND.

We first introduced our readers to expedition yacht charter vessel LEGEND and her upcoming schedule for Antarctica in a blog in October, when owner Jan Verkerk gave the green light to accept reservations in Antarctica through mid February, 2017.  The ship was built as a commercial vessel in 1973, then purchased by Verkek and outfitted in 2015-2016 as the ultimate luxury ice-breaker (enabling charter clients the unique opportunity to explore one of the last great frontiers on the planet earth, from the comfort of a luxury yacht charter vessel).

The yacht is packed full of features – from a helicopter to a 3-man submarine. Super yacht LEGEND allows her guests to explore this rare, frozen world from an entirely new angle (think of the early explorers who trekked across the frozen tundra in snowshoes and slept in tents…brrrrr…!!!

Intimate gatherings and relaxation can be found in the cinema, the Balinese-themed spa, or bubbling away on deck in the heated Jacuzzi.  There’s even a real fireplace in the saloon where you can cozy up and enjoy a good book.

Active guests can get their hearts pumping with a workout in the gym, exploring the ice packs on snow scooters, or hiking and coming face-to-face with the wildlife.

THE PRICE AND WHAT’S INCLUDED ON YOUR YACHT CHARTER

The weekly rate for up to 26 guests is $460,000 plus running expenses – items such as food, fuel, dockage, bar, etc. (+ Commercial Passenger Ship local taxes only when applicable). The charter fee includes personal laundry, normal communication costs, hotel supplies and basic internet (248/512 internet speed). Higher internet speed is possible, but not included in the charter fee.

After spending time in Antarctica, the yacht will head to South America and the Caribbean, then on to the Mediterranean for the summer.  Here are her current, confirmed expedition yacht charter vacations, and her schedule:

HOW TO BOOK SUPER YACHT LEGEND

Contact 1-800 Yacht Charters at 305-720-7245 or via our convenient online booking form to enjoy the ultimate superyacht experience onboard motor yacht yacht LEGEND. 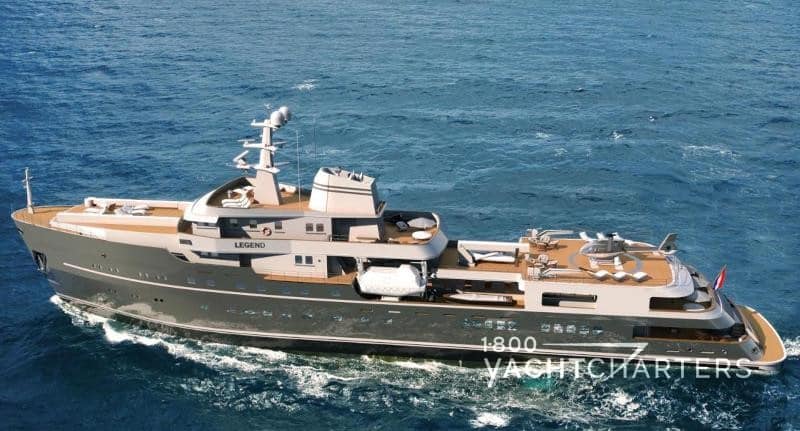 As of May, 2012, the inland waterways of Russia have lifted the restrictions on superyachts flying a foreign flag.
This means foreign-flagged megayachts, both charter vessels and private use ships, will be able to make their way to Moscow.
Yachting industry reports show 17% of the world’s largest yachts are owned by Russians;  however, none of these are Russian-flagged.
With these new rules in place, perhaps we will see more yachts making their way to the Russian capital…

HOW TO BOOK A YACHT CHARTER TO VISIT RUSSIA

To charter a superyacht anywhere in the world, contact 1-800 Yacht Charters at https://www.1800yachtcharters.com/book-now-contact-us/

There are many production 100-foot motoryachts in the Bahamas yacht charters market, but owners Dr. and Mrs. Emmons of luxury charter yacht SEAFARER didn’t want a cookie-cutter boat, particularly one costing $6 million. They wanted something that they could personalize to reflect their taste, their love of literature and the arts.

As a result, you will see throughout the boat bookcases built specifically for the Emmons, and nooks created especially to fit their fine collection of marine artwork. 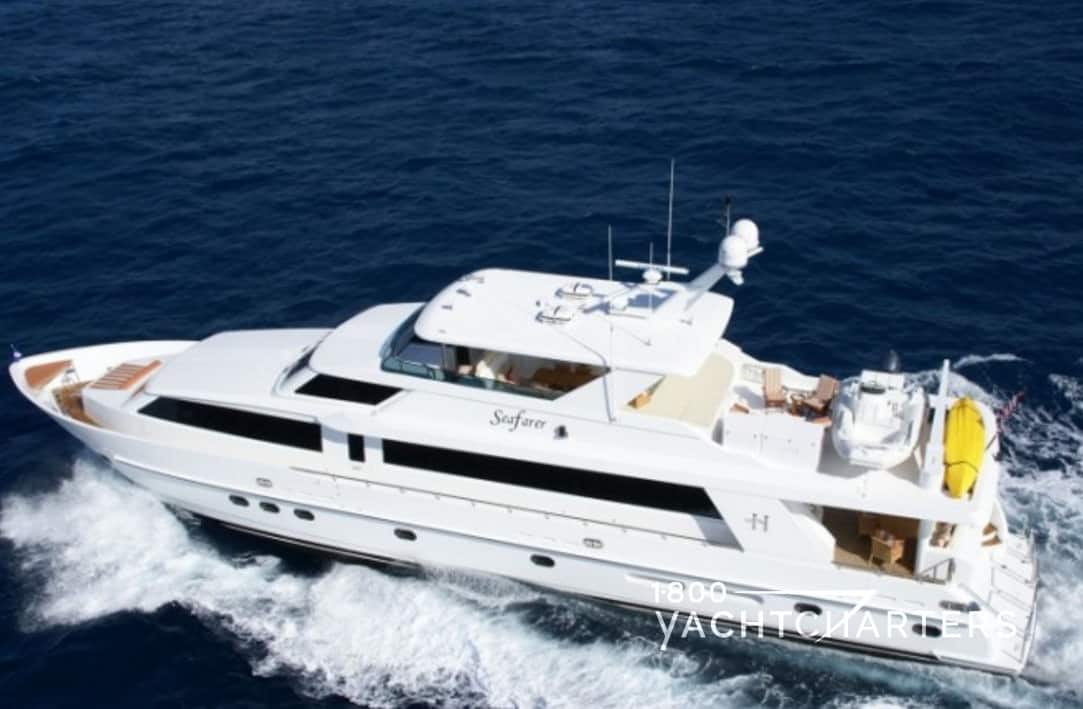 Luxury charter yacht SEAFARER motor yacht is a 30-meter megayacht available for a Bahamas yacht charter vacation. Yacht SEAFARER has accommodations for eight (8) guests in four (4) cabins. This new mega yacht was built by superyacht builder Hargrave and was launched in 2008.

Bahama yacht charters are all about outdoor adventure in the sun, so a large inventory of waytertoys are important. This mega yacht charter vessel carries a 15′ widebody Nautica tender with 90hp Yamaha engine, two 2-person kayaks, snorkel gear, towable toys and tubes such as Boogie Boards, plus beach toys such as volley ball, Frisbees, and 4 bicycles.

You, your family, and friends can enjoy a week-long odyssey in the Bahamas onboard this yacht for only $42,500 for 8 guests. Running expenses (items such as food, fuel, and dockage) are extra. For more information, contact Jana Sheeder, CEO of 1-800-YACHTCHARTERS at jsheeder@1800sailaway.com.

1-800-YACHTCHARTERS – providers of the Newest and Largest Yachts in the World’s Best Destinations. 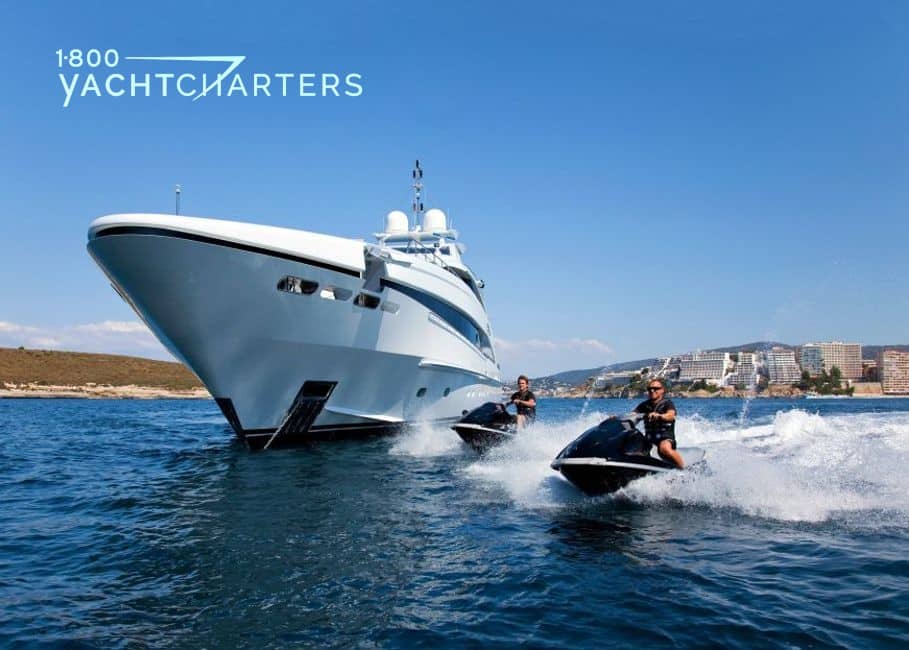 A weak US dollar could keep summer tourists away.  Superyacht owners of charterboats in the Mediterranean are offering deep discounts.

Yacht owners offer 10% to 25% discounts on weekly rentals in June.  Hopes are that price beaks will lure charterers to the med.  Specifically, the Côte d’Azur and Italy’s Amalfi Coast.

Check out these great June summer-savers:

CHARTER A YACHT WITH A DISCOUNT

Take advantage of these and other super summer rates in Europe, the Bahamas, and even New England, USA.  Contact  our destination experts HERE to book right now.

Which Color Is Best?   Motor Yacht Sherakhan Gets Makeover

If you owned a 228 foot luxury yacht charter vessel, would you paint it deep blue or polar white?

If you owned the massive motor yacht SHERAKHAN the answer is:  BOTH!

Originally built in 1965, the current owner bought the commercial vessel in 2005 and undertook a massive refit – basically gutting the entire ship from bow to stern and rebuilt her into a yacht charter vessel with accommodations for 26 guests (most yachts are limited to 12 or fewer). The full rebuild featured all new plumbing, electrical systems, air conditioning, and generators.

It also included a beautiful new paint job – a deep blue hull, with a white superstructure…

Fast forward to 2017, and the owner decided it was time for another refit. All new decks were installed, along with new soft fabrics throughout the guests areas and cabins, and a complete overhaul of all major equipment in the engine room.

As he did in 2005, the owner completely repainted the superyacht charter vessel – this time a clean, crisp white, with subtle grey accents.. 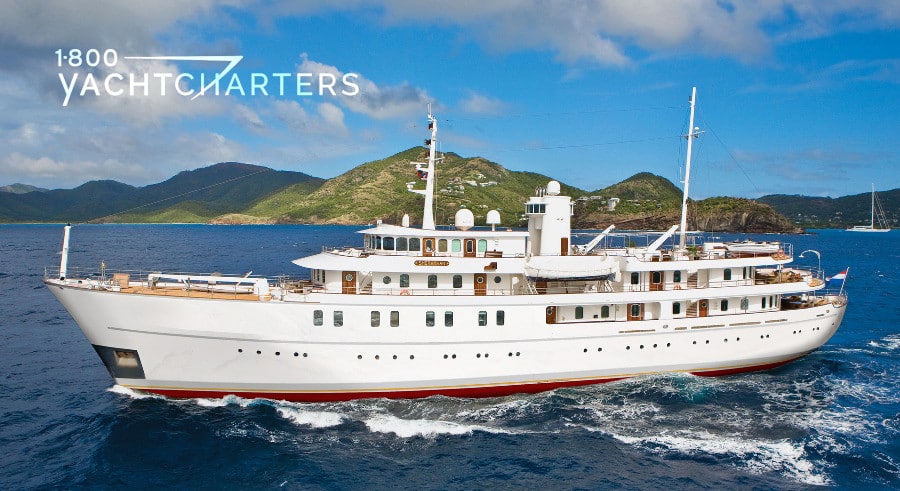 The expedition style yacht is available in the Caribbean and will remain there through April.  In the summer, the yacht will relocate to the Mediterranean (e.g.  Monaco yacht charter or Grand Prix formula 1 races, etc.) for the summer of 2018.

So what do you think?   Do you think she looks better in blue or in white???

To check availability or get more information about this yacht, visit https://www.1800yachtcharters.com/explore-our-yachts/sherakhan/book-now/

“Hey, 1-800 Yacht Charters. I saw ‘Serene’ while i (sic) was on vacation in France last summer. Beautiful yacht!  Can you tell me who owns her?”

Thanks for asking, Bob.  There’s an old saying, “I could tell you, but then I’d have to kill you!”  LOL

All kidding aside, one of the alluring benefits of luxury yacht charters is the element of privacy.  We carefully guard the identity of our charter clients and their guests – both for reasons of safety and discretion.

The same discipline applies to the owners of the yachts we offer for charter, as most prefer to remain anonymous.

That being said, certain details were recently released to the public, so now we CAN share that information with you:

That yacht is the 440 foot motor yacht SERENE…

The article reads, “While vacationing in the south of France, Prince bin Salman spotted a 440-foot yacht floating off the coast. He dispatched an aide to buy the ship, the Serene, which was owned by Yuri Shefler, a Russian vodka tycoon. The deal was done within hours, at a price of approximately 500 million euros (roughly $550 million today), according to an associate of Mr. Shefler and a Saudi close to the royal family. The Russian moved off the yacht the same day.”

Built in 2011, Fincantieri yacht SERENE is the largest yacht ever launched in Italy and features more than 4,000 square meters of interior space spread across seven decks, plus two helipads and a hangar. At the time of her launch, she was the 9th largest yacht in the world and the largest yacht available for charter.

Each year, the newest yachts get bigger and bigger.  As of mid-2016, the yacht had “dropped” to #13 on the list world’s largest yachts.

So there you have it, Bob – now you know the names of BOTH the former and current owner of superyacht SERENE!

Contact us at 305-720-7245 or fill out our convenient online book now form at https://www.1800yachtcharters.com/book-now/ to plan your own private luxury yacht charter on a yacht like Serene. 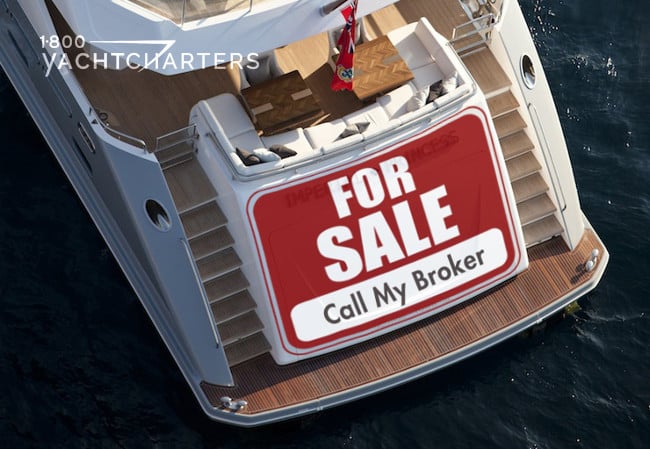 Can sale of yacht affect vacation?

Did you know?  Your fully-executed yacht charter agreement is not guaranteed.  It’s not guaranteed that your yacht will be delivered to your desired port of embarkation on the start date of your vacation.  Many charterers understand about mechanical problems or acts of nature, like hurricanes. These things can force the cancellation or the delay of a planned yachting holiday.  Few realize the sale of the yacht can also result in a cancelled charter.  Unfortunately, there is minimal recourse for the customer.

This is similar to many segments of the receding global economy.  Sales of the largest yachts are in a major slump.  Financial woes push increasing numbers of yacht owners to put their vessels up for sale. The result is a glut of yachts for sale with prices dropping each month.

“The fact that owners are actively marketing their yachts for sale, means charter clients must be keenly aware of whether or not their chosen yacht for their vacation is for sale,” states Jana Sheeder, President of 1-800 Yacht Charters and The SailAway Group.  “Most charter  contracts have an escape clause for owners if they sell their yachts before the charter. Of course funds  are returned to the customer, but there is no guarantee a suitable replacement yacht can be provided for the same price and the same desired charter dates.”

To hedge the odds in favor of the charterer, Sheeder and her team try to promote newer-model yachts to their prospective clients. “Statically, owners will want to enjoy their new yachts for a year or two before considering their sale.  We try to take advantage of this situation and promote newer yachts to our clients, to minimize the exposure to the potential sale of a yacht.”

Sheeder encourages charterers to ask their charter brokers about the sales status of any yacht that  they consider renting. Ideally, they should seek a yacht that is not listed for sale.  Says Sheeder, “If considering a yacht that is for sale, ask your broker for an analysis of how actively the owner is trying to sell, and see if there have been numerous or recent price reductions.  Try to avoid any charter yacht that is actively for sale – or you could end up high and dry for your vacation.”

Visit 1-800 Yacht Charters for a selection of the newest yachts available for hire around the globe. Click https://www.1800yachtcharters.com/newest-yachts/