Are you ready for the “Good News/Bad News” update?

GOOD NEWS:  Formula 1 announced an agreement in principle to hold a race in Miami, starting in 2021.

BAD NEWS:   Undoubtedly, the idea a Miami Grand Prix yacht charter seems lost, as the race will be held inland. Specifically, far from the ocean.

We were initially excited to see race organizers focusing on a circuit in downtown Miami, along Biscayne Bay.  This course allows superyachts to dock or anchor close to the course, similar to the layout of the Monaco Grand Prix.  Yacht charter clients and their guests watch the cars scream by from the comfort of their yacht’s sun deck.

There was considerable local opposition to holding a grand prix in downtown Miami.  Residents and local business owners voiced concerns about interruptions to business caused by the construction of the race track.

Organizers then shifted their attention to building a road course on the grounds of Hard Rock Stadium – home to the NFL’s Miami Dolphins.  The stadium is miles inland from the ocean – in the community of Miami Springs.

This week, Formula 1 announced an agreement has been reached with real estate mogul and Dolphins owner Stephen Ross to establish a race in Miami, with the inaugural event in 2021.: 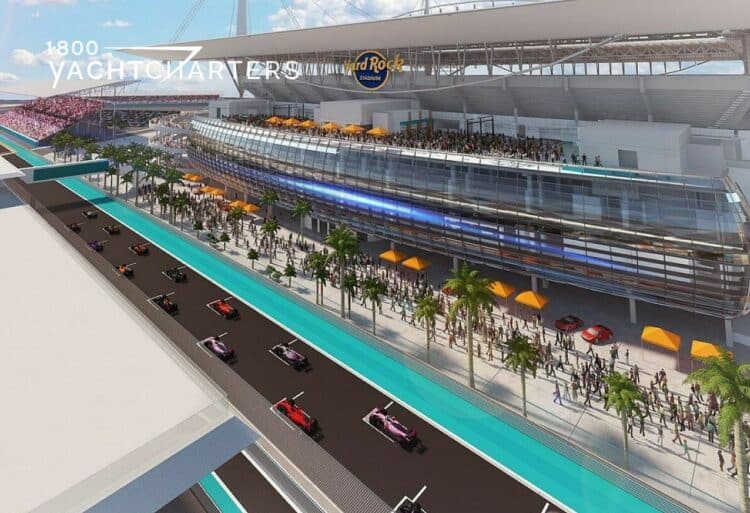 The agreement is subject to approval by Miami-Dade County.

In their statement, F1’s Sean Bratches and Tom Garfinkel, the chief executive of Hard Rock Stadium, outlined the financial benefits the race will bring to Miami.

“With an estimate annual impact of more than $400m and 35,000 room nights, the F1 Miami Grand Prix will be an economic juggernaut for South Florida each year.”

“The world’s greatest racing @f1 has never been to S. Florida. Imagine people coming to this region from around the World in May. Multiple passing zones and world-class clubs and amenities.  Barcelona, Monaco…  Miami…  make it happen.”

The agreement specifically calls for Ross to fund construction of the estimated $40 million custom track and cover all race-related expenses.

WHAT ABOUT THE YACHTS?

Watching the race from the deck of a yacht charter vessel is now out of the question.  In spite of the location change, we are hopeful clients will still consider a Miami Grand Prix yacht charter – as a “Destination Event.”

The yachts can serve as platforms for corporate hospitality!  Helicopters and private transportation in use to shuttle clients and guests to Hard Rock Stadium for the race.

Formula 1 is here.  Ladies and Gentlemen, start your engines.  Captains, prepare to cast off!

Formula One is scouting Miami, Florida as a site for a Grand Prix race.  F1, or FIA Formula One World Championship, is the foremost auto racing league.  Envision Miami. First, dozens of superyachts lining the course.  Second, thousands of thrilled spectators on yachts to watch see the action. 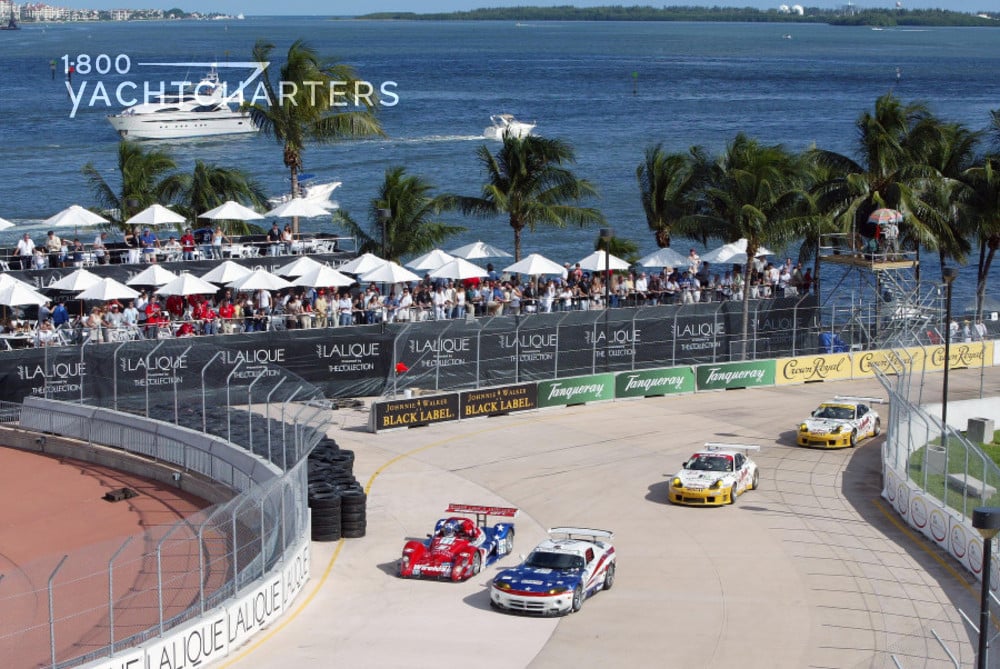 Per the Miami Herald, F1 execs met with Miami mayor and government officials in November.  They discussed racing logistics for an annual event along Biscayne Bay, through downtown Miami.

Events Director for city of Miami, Vicente Betancourt, says the goal is to add Miami to the Formula 1 season in 2020. “It’s like the Super Bowl of auto racing,” said Betancourt. “Hopefully we can make it happen.”

WHO WILL ANNOUNCE THE RACE?

Will the amazing Michael Buffer possibly be the announcer for a Miami Grand Prix Formula One race?

WHO WILL DRIVE RACE CARS?

Equally important, what a wonderful boost for the South Florida economy.  A Grand Prix Formula One race could provide corporate sponsorships from such companies as Amazon.  (Jeff Bezos, graduated high school in Miami, in the same class as our company President, Jana Sheeder). Additional sponsors are lining up. For instance,

From April through November, the Formula One’s series is comprised of 20 races in cities around the world. Those cities include Singapore, Budapest, Sao Paulo, Dubai, and Monaco.   There are 15 road courses and five courses laid out on city streets.

Formula 1 has new ownership (Liberty Media) and looks to expand its U.S. presence.  F1 has a massive fan base across the globe; however, it lags behind other sports in the United States, like football, basketball, and NASCAR.  Soccer is as popular as F1 racing. The only United States Grand Prix race is in Austin, Texas right now. Chase Carey, Liberty Media’s CEO of the Formula 1 Group, says he wants another race in America.  An event in Miami, or possibly Las Vegas or New York, has been publicly discussed.

Carey wants to see F1 grab a foothold in “destination cities” like New York, Los Angeles, Miami, or Las Vegas.  As a result, this would create a week-long celebration capable of attracting people from all over the world.

Jana Sheeder, President of 1-800 Yacht Charters believes Miami is a natural fit for a F1 event.

“Of all the races held annually by F1, the two premier events are staged in Monaco and Abu Dhabi,” says Sheeder.  “Both locations have courses along the waterfront, and thousands of spectators enjoy the race and the festivities from the decks of dozens of luxury yachts.  The Miami Grand Prix would duplicate that unique setting, as the course would pass through downtown Miami, along our beautiful waterfront area – and we have many superyachts that already make South Florida their home port.”

According to AutoGuide.com, Formula One filed on November 1st for a new trademark on a race event in Miami (as well as Las Vegas and New York). The next day, Sean Bratches, Formula One’s director of commercial operations, came to Miami, with his track engineers, and met with Mayor Francis Suarez and checked  out the city streets near the downtown area, along the waterfront. Betancourt, who has been in communications with F1 since May said nothing was finalized. “We’ve got to see if it works and what it would cost them to actually bring it out. I think the ball is pretty much in their court.”

Sheeder points out the idea of a major road race and spectator yachts is not new for the city. In the 1980’s, the Miami Grand Prix was a major annual event (but not affiliated with the F1 series).

“Private luxury yacht charter vessels would line up, stern-to the seawall in the area that is now the Bayside Marketplace, and spectators would watch the race from the deck of their superyachts. In the evening, many of the yachts would host private parties for the charterers, as well as the owners, drivers, and corporate sponsors of the racing teams.”

“Assuming the financing and logistics make sense for Formula One, a corporate hospitality Miami Grand Prix  yacht charter could easily rival the excitement of a Monaco Grand Prix yacht charter or an Abu Dhabi yacht charter.  Yes, Monaco has the edge thanks to many decades of exposure, but Miami could make a big splash.  We have the best weather, and the largest inventory of luxury yacht charter vessels anywhere in the world.  Throw in the sexy appeal of nearby South Beach with world-famous hotels, restaurants, nightclubs, and celebrities, and Miami is a world-class big-event town.”

Where else can you go to an upscale event, wearing little more than sandals and a bathing suit, where the best “seat” in the house is in an on deck Jacuzzi on a private luxury yacht??? 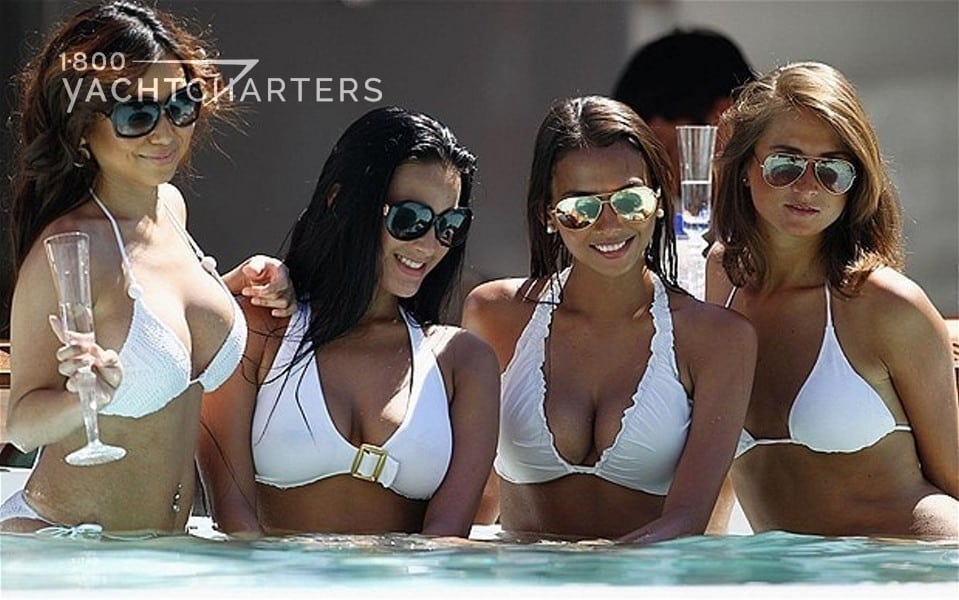 Welcome to Miami! Bienvenidos a Miami!

In conclusion, attending a Grand Prix event on a yacht is the ultimate in corporate hospitality.  Come experience the excitement and glamour of Formula 1 racing in 2018.

For more information about a Monaco Grand Prix yacht charter, or to rent a yacht for the Abu Dhabi Grand Prix or for any other F1 race, contact us at https://www.1800yachtcharters.com/book-now-contact-us/ TODAY.