With many toys and electronic devices that enhance a week’s vacation at sea, we choose 3.
Our charter professionals take a look back at their favorite gadgets for 2012. 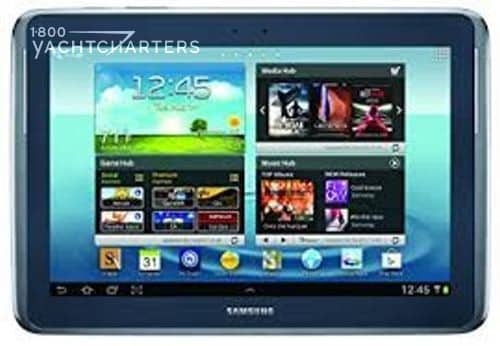 With battery life almost equal to the iPad, and a memory-card slot not found on Apple’s iconic tablet, the 10-inch, 16GB Galaxy Note offers capabilities that no other tablet currently offers.

What’s a Caribbean yacht charter vacation without a boatload of photos to share with family and friends?  The 16 megapixel point-and-shoot camera can run Google’s Android operating system and all the apps that go with it, enabling users to edit an image, and quickly post it to Facebook, etc… 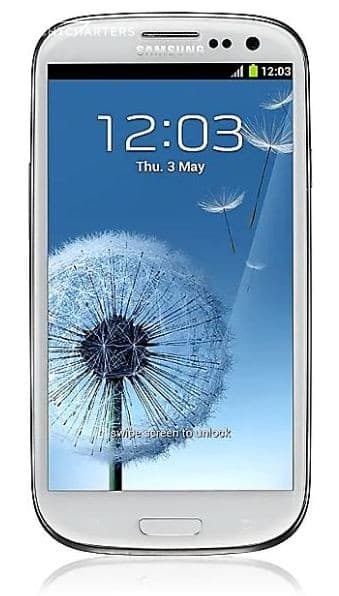 We’ll admit the Apple iPhone 5 has a better camera, and new features place it head and shoulders above previous iPhones.  Still, our choice for the best smartphone in 2012 is the Galaxy S III .   The Android-driven Galaxy has a bigger screen than the iPhone 5 and lots of features you can’t get on Apple ‘s smartphone.  The sensor-based tools are great for social networking.
==========================
In conclusion, isn’t it time to pack your favorite gadgets in a duffle?  Head to the islands for a little pampering, rest, and relaxation.  Great deals on sail boat charters are plentiful!  Contact the 1-800 Yacht Charter  experts at https://www.1800yachtcharters.com/book-now-contact-us/ for details.

Angel at Christmas In The Seychelles

If pristine waters, quiet coves, and uninhabited islands are your idea of Heaven on earth, we have an, “Angel,” waiting to celebrate Christmas, Hanukkah, Kwanzaa and all winter holidays with you.
Benetti yacht charter vessel motor yacht SILVER ANGEL has announced availability this Christmas for a once-in-a-lifetime vacation in the exotic Seychelles Islands. 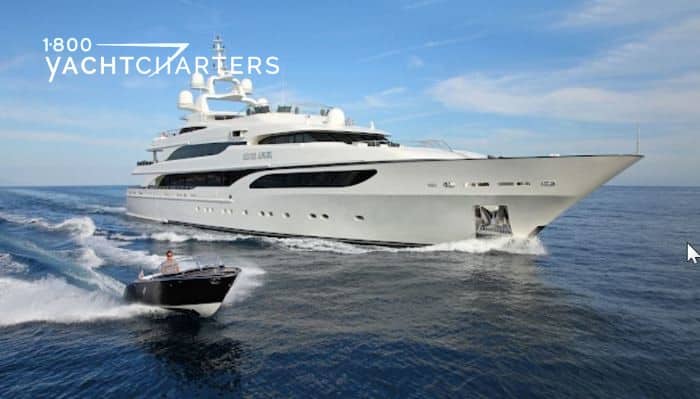 Indian Ocean rates for the winter season are set at USD $450,000 per week plus running expenses.

HOW TO RENT A MOTORYACHT

For more information or to charter a luxury motor yacht, contact 1-800 Yacht Charters at https://www.1800yachtcharters.com/book-now-contact-us/

) was the beautiful Muse of epic poetry.  Fast forward two-thousand years, where that classic beauty and spirit can be enjoyed onboard motor yacht CALLIOPE.

Launched in 2010 by fabled Dutch builders Holland Jachtbouw, the 42.28m (138ft 8in) yacht has left the confines of the Mediterranean yacht charter fleet for new adventures in the Pacific Ocean, where she will be based this winter in the yachting capital of Auckland, New Zealand.
Currently, motor yacht CALLIOPE is available for a year-end yachting holiday at the attractive rate of  $160,000 per week plus running costs, for up to ten guests in five staterooms!
Multi-repeat charterers scramble to find new destinations for their winter vacations.  New Zealand is the hot spot for 2013.  It has easy international flight access.  Auckland is the perfect embarkation port.  Furthermore, it is a short cruise from the stunning nearby Hauraki Gulf islands.  For instance, Rangitoto, home to the largest volcano in the region.

HOW TO CELEBRATE NEW YEAR’S

Sixty (60) meter motor yacht DARLINGS DANAMA is on her way to the Leeward Islands, where she will attend the annual Antigua charter show. 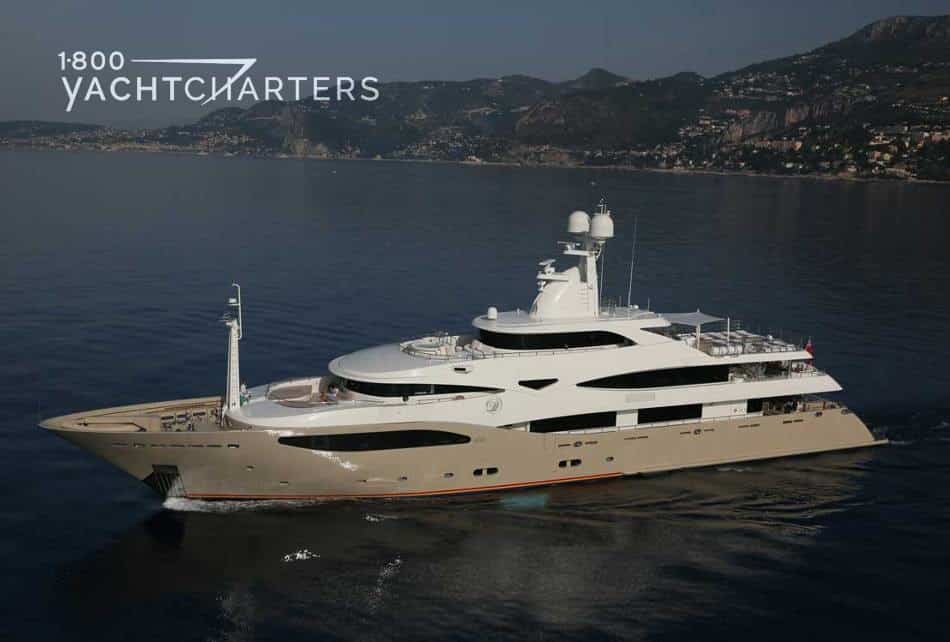 DARLINGS DANAMA is built Built by CRN and designed by Zuccon International Project Studio. She has vast open areas and light airy interiors.  She is the ultimate entertainment yacht.  For instance, every inch of this Euro beauty meticulously finished.  Finishes include her interior, styled to perfection. Her designers are Alexandre and Cristina Negoescu, who create a minimalistic, yet Art Deco touch to the yacht’s warm and colorful interior.
The 196 foot vessel is inviting and relaxed. For example, primarily built for comfort and entertainment shows in her outdoor areas. The impressive main and upper decks offer multiple lounging and dining areas for both formal and casual occasions.
The entertainment theme continues up to her spacious sundeck, featuring a large Jacuzzi, lounging areas, wet bar, and a fully-equipped Gym.
Physically-challenged guests can reach each deck at the push of a button – courtesy of a glass elevator. 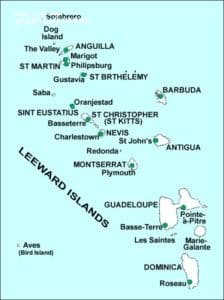 Motoryacht DARLINGS DANAMA accommodates 12 guests in six cabins. Each fantastically-equipped and beautifully-decorated stateroom exudes luxury and seclusion.  One cabin outshines the rest.  In specific, the full-width owner’s suite located on the main deck. It features a private balcony. This gorgeous yacht plans Caribbean adventures in St. Barts and St. Martin this season.  If you see her, please take photos and send them to us to be featured in a guest blog! 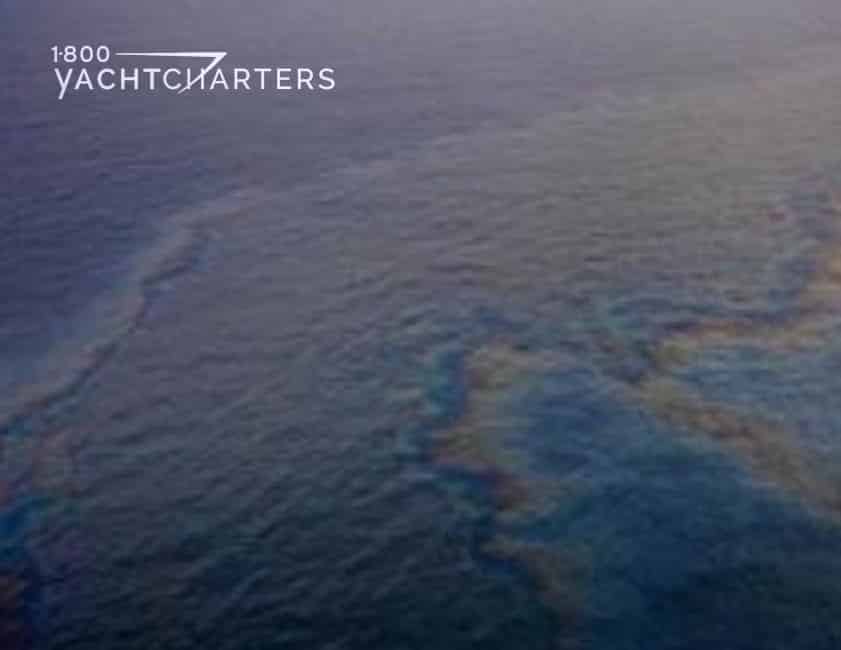 A new polymer that might help luxury mega yacht charter vessels keep marinas free from leaking oil, could have an even greater impact on major oil spills, like the Deepwater Horizon disaster.

Scientists from Pennsylvania State University (PSU) have come up with something.  As a matter of fact, it  shows great promise. In specific, a polymer that soaks up 40 times its weight in oil.

It goes into the body of water where an oil spill has occurred.  The Polyolefin Oil Superabsorbent Polymer transforms floating crude oil into a “soft, solid oil-containing gel.” PSU scientists claim something.  Specifically, one pound (453 grams) of the polymer soaks up around five gallons (19 liters) of oil. In fact, without absorbing any water.  Scientists then subsequently collect, transport, and refine the gel and recover the trapped oil.

Practical applications are being analyzed for the yachting industry.  Researchers hope the new polymer fights large-scale oil cleanup projects.  Currently, more traditional oil-absorbing materials are employed, such as corn cobs and straw which only absorb about five times their weight in oil.

Read how a Prince encourages the Superyacht Industry to go green at https://www.1800yachtcharters.com/european-prince-encourages-superyacht-industry-to-go-green/

HOW TO BE DIFFERENT?

The superyacht rental market is highly competitive.  Owners look for new aquasport toys to add to their onboard inventory daily.   One of our readers contacted us after a boat show. He saw a unique toy there that he knew we would like.  We think it catches the attention of the charter industry.

The Foiljet MR1 is a new personal watercraft.  It combines the features of a motocross bike and a jetski.  The bike is built on a two hydrofoil platform.  It features a silent, energy efficient electric motor.  his wacky new toy looks to be a surefire recipe for outrageous fun. 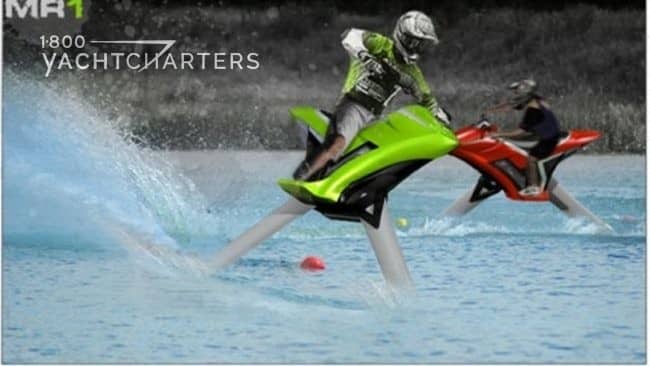 The design looks like a motocross bike.  Instead of motorcycle wheels, there are thin beams with hydrofoil wings. These are mounted at the ends of the wings, and they can be raised or lowered.  The Foiljet employs a 15 kW (20 hp) electric motor. It is housed at the end of the rear beam.  The motor delivers the electric torque that lifts the craft out of the water.
Since most charter clients prefer the relative safety of playing in shallow water, the Foiljet beams can be raised at the flick of a switch, allowing the rider to stay closer to the water’s surface.
The electric motor runs off a 48V battery that delivers about three hours of full load running.  After that, it’s back to the mothership for lunch and cocktails while the Foiljet battery recharges for another run!
Still in the prototype stage, the designers are hopeful the toy will catch on – especially with eco-friendly yacht owners. Hydrofoils produce relatively no wake and the electric propulsion system is nearly silent.
While many bays and harbors visited during Mediterranean yacht charter holidays restrict the use of noisy personal watercraft such as waverunners, the developers of the Foiljet MR1 are confident there silent, eco-friendly new toys will be permitted in most waterways.  Are you a superyachting eco-hero?  Isn’t it time you pampered yourself and chartered a yacht that is also good to the planet?

HOW TO RENT A YACHT WITH WATERTOYS

When you rent a private yacht for hire, make sure it is loaded with exciting watertoys for the entire family.  Ask the experts at 1-800 Yacht Charters to share with you a selection of well-equipped charter vessels.