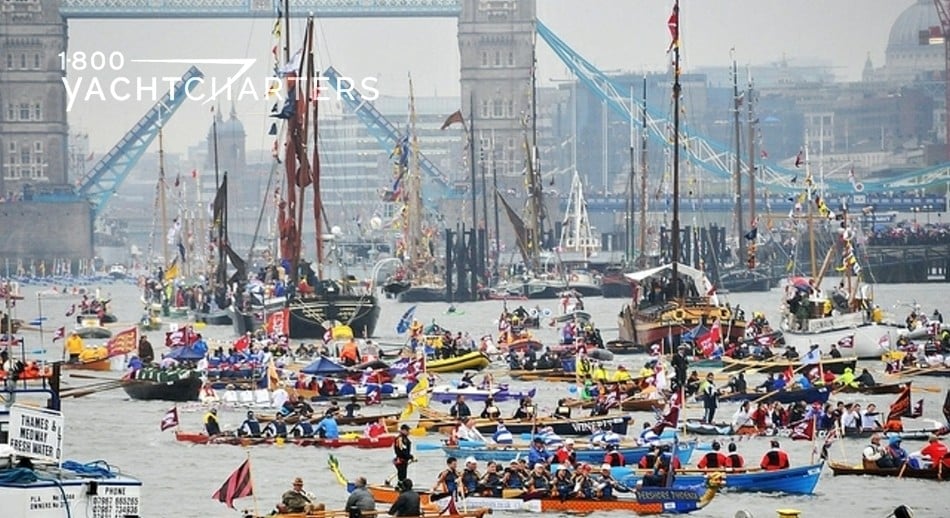 Prior to the London Olympics in 2012, another special event exists.  A once-in-a-lifetime yachting spectacle in London wants you to participate. Truly a bucket list adventure

The Queen of England leads a flotilla of boats and yachts.  They present the Thames Diamond Jubilee Royal River Pageant on Sunday June 3rd 2012 to celebrate her 60 years on the throne.

For example, over 1,000 boats and yachts of all sizes are expected to participate.

It is touted as one of the largest flotillas assembled on the Thames.  Approximately 30,000 people waving flags and cheering Her Majesty the Queen attend.  In addition, rowed boats, working boats, and pleasure vessels join luxury mega yacht charter vessels on the river.

WHAT CAN I EXPECT TO SEE AT THE JUBILEE?

Taking place just 6 week prior to the opening ceremonies of the 2012 London Olympics, the yachting spectacle will be enhanced with music barges, boats spouting water cannons, and pyrotechnic barges launching daytime fireworks. There will also be specially-constructed elements like a floating belfry – its chiming bells answered by those from riverbank churches.

Thames piers, riverside roads and bridges will be closed to traffic.  At the same time, 40 to 50 giant screens will be erected along the flotilla route.  The public can also enjoy the pageant from multiple vantage points to the left and to the right of the river. The flotilla concludes at Battersea Park.  The conclusion includes music and artist-led Jubilee-themed entertainment.

The Thames Diamond Jubilee Pageant celebrates Her Majesty’s sixty years of service to the British Commonwealth by bringing the Thames to life.  Pageants on the Thames date back to 1453. The River to include superyacht vessels and boats, clanging bells, and tooting horns will recall its royal heritage and its heyday as a working, bustling river.

Participate in the Thames Diamond Jubilee Royal River Pageant this year.  In addition, secure a yacht and berth for the London Olympic games!  Your choice…  Contact our destination specialists HERE right now to reserve a yacht.

Ms. Jana Sheeder is President of 1-800 Yacht Charters. Providing The Superyacht Experience(tm) since 1976. Private luxury yacht charter vacations in the Mediterranean, Caribbean, Bahamas, South Pacific, South Florida, Miami and The Florida Keys, Italian Rivera, Belize. Megayacht charter company focused on generosity, Pay It Forward, Random Acts of Kindness, Giftivism, giving back to the ocean, to the needy, and the environment with every superyachting charter. Providing eco-friendly alternatives while on yacht charters and known for 6-star customer service, experience, and generosity.
View all posts by →